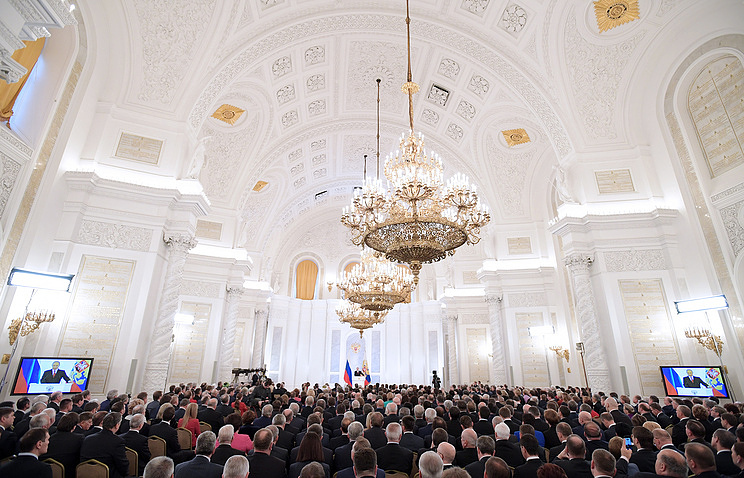 MOSCOW, March 1. /TASS/. Russian President Vladimir Putin on March 1 will announce the message to the Federal Assembly. It is traditional, usually annual address of the President to members of Parliament provided by the Constitution of the Russian Federation. This year it will take place less than a month before the presidential election, participation in which will accept and running for the new term of Putin.

The current address will become the 24th in the modern history of Russia and 14th Putin personally. Typically, these demonstrations, which the President presents his assessment of the situation in the country and the vision of the main directions of development for the future, have been within the calendar year. Only in 2017, the message never took place. In December of last year, first Deputy head of the Kremlin administration Sergei Kiriyenko recalled that the appeal to Parliament is the right of the President, and he can implement his “when deemed necessary”.

According to tradition, the event will begin at noon Moscow time. In addition to parliamentarians on delivering the message invited members of the government, chairmen of constitutional and Supreme courts, the Prosecutor General, the head of the Central election Commission, accounting chamber and the Public chamber, regional leaders and other dignitaries, heads of major denominations and representatives of the media. The speech is broadcast on live television and radio.

The current message will be different from the usual format. So, in recent years, the President addressed the MPs in the St. George hall of the Grand Kremlin Palace. This time he will deliver a message at the Central exhibition hall “Manege”. The press Secretary of the President Dmitry Peskov explained the change of the traditional locations to expand the number of participants.

In addition, for better visualization during the announcement of the message will be used screens infographic. According to Peskov, such equipment is difficult technologically and logistically to establish in the Grand Kremlin Palace, the premises of which are of historical value.

In connection with the presidential message has adjusted its programme and organizers of the media forum of the popular front, which took place in Kaliningrad from February 28 to March 2. It is expected that the message will be broadcast during the event, and after, the participants will discuss it on the forum with political analysts and experts.

The contents of the document

The Kremlin traditionally do not reveal the content of the message prior to its publication. But Putin himself in February at their meetings and in public speeches have repeatedly pointed out the topics that plans to raise and highlight in the document.

So, at the meeting of the Council for science and education in Novosibirsk, he promised to use announced there are proposals to prepare a speech before the Federal Assembly, “but not just to say it, but in order to make these [reports made at the Board] deals with the program of our joint work”.

In addition to the problems of domestic science, Putin intends to touch upon the topic of creating the conditions for business in Russia. At the Congress of the Russian Union of Industrialists and entrepreneurs, he told the representatives of big business that the Russian authorities intend to improve the business climate, to create a comfortable environment for investment in new production, to eliminate barriers in regulations, develop the infrastructure, to set up the system of vocational and higher education to the needs of domestic industry, agriculture and other industries. These questions then Putin has promised to address in the message.

Another subject of the message, according to the President, should be the problem of the relationship between law enforcement and business. Yesterday at the enlarged meeting of the Collegium of the Ministry of internal Affairs he demanded to pay special attention to “creating favourable business environment, the protection of the legitimate interests of the business, to thoroughly investigate the facts of pressure on entrepreneurs, their unjustified harassment, including from law enforcement bodies”.

A message against elections

Sands noted that the current address to the Parliament, Putin will act as President and as a candidate for the highest office. In this regard, he did not rule out that the tasks that Putin put will be assigned later in the form of decrees, although there is another form of legal registration.

“Of course, it is the constitutional duty of the President, he will announce this message in my capacity as the President of the Russian Federation. But since he is both a candidate during the electoral campaign, which now has a place, of course, the vision of the outcome of work over the past year and vision for the work anyway will coincide with the program of the candidate of Putin. It’s inevitable,” he said.

“Of course, the tasks will be outlined and current President Putin and candidate Putin, one way or another will be recorded with the bureaucratic point of view,” added the spokesman.

In turn, the Chairman of the Central election Commission (CEC) of the Russian Federation Ella Pamfilova said that the appeal running for the new term of Putin with the message is within the law. She explained that in this case the incumbent head of state performs its constitutional powers.

The message to the Federal Assembly is one of the major presidential events of the year and is always of high interest from both the Russian Federal and regional, and world media. The current treatment has attracted a record number of journalists. This time lighting it from the Arena of going more than 700 people, representing various Newspapers and magazines, online media, television and radio. In 2016 to work in the Grand Kremlin Palace has about 600 accredited journalists.

The history of the tradition

Date of the President’s speech with a message not fixed and is determined each year depending on the work schedule of the head of state and the readiness of the document.

Since the first such address to both chambers of the Federal Assembly addressed President Boris Yeltsin in February 1994. In the first two presidential terms of Putin’s message echoed in spring and summer, when President Dmitry Medvedev date of performance has moved closer to the end of the year. All the previous address to the Federal Assembly Putin during his current presidency took place in December.

Until 2008, when the presidential address was moved to the St. George hall of the Grand Kremlin Palace, the event was held in the marble hall of the 14th building of the Kremlin.

Practice of the President to parliamentarians in many countries of the world. For example, in the present speech from the throne remain in the UK, Spain, Belgium, the Netherlands. The President of the United States every year since 1790, says in front of Congress speech “state of the Union”, in France, Italy and some other countries heads of state read out a list of instructions to their governments. In Germany and Austria to the Cabinet of Ministers appeal to the Chancellor. The Institute requests of the head of state to the Parliament exists in many countries of the former Soviet Union.