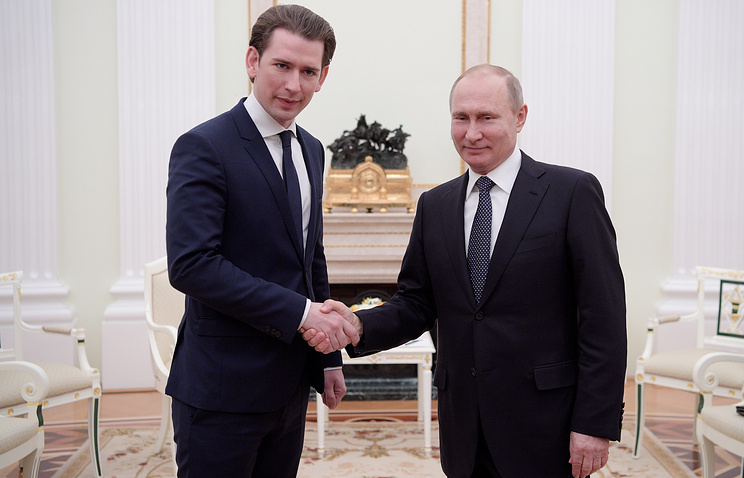 MOSCOW, February 28. /TASS/. Russia and Austria reaffirmed the unambiguousness of the Minsk agreements to resolve the crisis in Ukraine. This was announced by Russian President Vladimir Putin following talks with Federal Chancellor of Austria Sebastian Kurtz.

“Discussed the situation in Ukraine, – said Putin. – We agree, the Minsk agreements remain the only basis for the settlement of the crisis.”

Putin recalled that Kurtz, as Minister for foreign Affairs of Austria, paid much attention to the Ukrainian domestic conflict, and was actively engaged in this issue in the Austrian chairmanship of the OSCE in 2017.

According to the head of the Russian state, in the second half of the year, Austria will preside the European Union. In this regard, the two leaders discussed prospects of relations between Russia and the EU, noted the importance of maintaining full relations both in politics and in the economy.

“In the context of the situation in the middle East, especially in Syria, stressed the primary importance of joining the international community in the fight against terrorism, relying on the coordinating role of the UN and norms of international law”, – concluded Putin.

Russia is ready to work on the settlement in Ukraine, but need political action by all parties to implement the Minsk agreements, Putin said.

“In fact, there is talk about how to put the whole of the territory under international control. Russia for or against? We at least don’t mind, but you need to negotiate with these unrecognized republics. Go talk to you then. No, no one wants to do, – Putin said. – Tell me, please, there is at least one example in the international practice when resolving conflicts of this kind occur without the involvement of one of the conflicting parties? Such practices in the world, but unfortunately no one (at least the current Kiev authorities) do not want direct dialogue, as foreseen in the Minsk agreements with the representatives of these unrecognized territories.”

Putin recalled how there were discussions about the presence of the UN mission in the conflict zone in Ukraine. He told how he publicly supported the relevant UN resolution. “But when we did, it turned out that this is not enough. Although initially the idea was to ensure the safety of the OSCE observers, located on the line of contact. We believe that it is enough that the UN mission has carried out this role,” he said, adding that initially Ukraine raised the question of whether to arm the staff of the OSCE with the aim of ensuring their safety. “We agreed to do it. The OSCE refused, citing the fact that neither of experience that they have, or people who could do that, no. And third, there is a fear that as soon as the OSCE personnel will take up arms, they will be a target for both sides,” – said the head of state.

The President noted that it was therefore expressed another idea is to put a UN mission. “We agreed. After that, the German Chancellor, in one of the phone conversations put the question this way: “But the staff of the OSCE are on the border between Russia and Ukraine.” I said, “Yeah, you’re probably right. Let them be there too, when will be accompanied by OSCE staff”. We went to it, but it was not enough. Now they say that they must be everywhere,” – said the Russian leader.

Summing up, Putin said that “we must first make the political steps to resolve, to start the implementation of the Minsk agreements, and then to think about future steps.” “Today we need to ensure the security of OSCE personnel. We agree, let’s make at least this step! But for some reason do not want, it appears. Strange, but we will work on this together with all stakeholders”, – concluded the Russian leader.