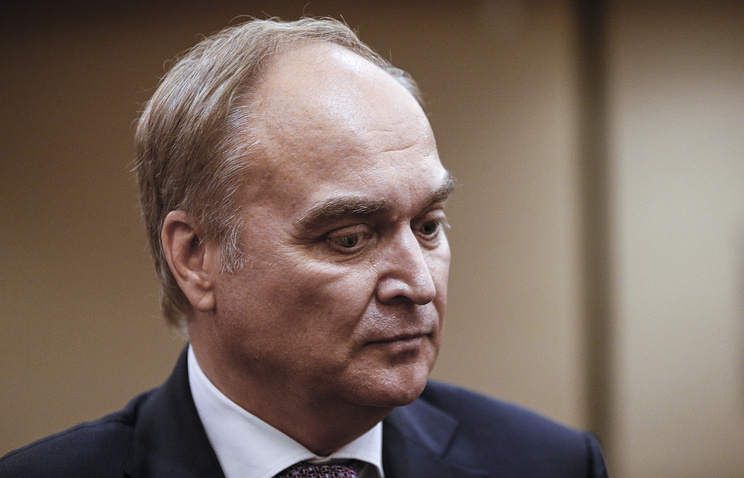 WASHINGTON, March 2. /TASS/. Russia considers the accusations of the American government in Moscow of violating the Treaty on the elimination of intermediate and shorter-range missiles (INF Treaty) are unfounded and not supported by any specifications. This is stated in a statement on Thursday the statement of the Russian Ambassador to the U.S. Anatoly Antonov.

“The message [Russian President] Vladimir Putin’s speech was on strategic arms, which do not fall under the restrictions of the INF Treaty. I stress once more that Russia is developing its nuclear capability, has not violated any agreement in the field of disarmament and arms control. All that is done, the Ministry of defense of Russia, the Russian military-industrial complex is in strict conformity with our international obligations,” he said.

According to the diplomat, Russia finds the accusations “in violation of the Treaty groundless.” “These accusations are not backed up by any technical specifications of the launcher, allegedly does not meet the contract, nor data and flight telemetry”, – he added. This Antonov drew attention to the fact that Moscow in turn “there are serious concerns on the performance of the contract from the USA”.

“Is the use of target missiles, its characteristics are similar to ballistic missiles, medium-range and shorter-range, under test, manufacture, and application of shock unmanned aerial vehicles, and deploying databases on missile defense in Romania and Poland universal launchers, allowing, in particular, to launch cruise missiles at a range prohibited by the Treaty. Moreover, in recent years, the United States openly declare their intention to proceed with the development of cruise missiles, ground-based, with a restricted range. So anti-Russian propaganda campaign in the context of the INF Treaty gives all the more reason to talk about the fact that Washington took a course to withdraw from this agreement, as there at the time withdrew from the Treaty on the limitation of anti-ballistic missile systems”, – said the Ambassador of the Russian Federation.

“Has repeatedly called on American colleagues to the professional conversation on this topic. Repeatedly warned and again be warned that the destruction of the INF Treaty would be a severe blow to the regime of arms control and non-proliferation of nuclear weapons”, – concluded the head of the Russian diplomatic mission.

In his address to the Federal Assembly, Russian President Vladimir Putin on Thursday announced the development and testing of new systems of strategic weapons created in response to the unilateral withdrawal of Washington from the ABM Treaty and the practical deployment of this system on the territory of the United States and outside their national borders.

Among them a new Intercontinental ballistic missile “Sarmat”, a hypersonic complex “Dagger”, a cruise missile with a nuclear power plant and an unmanned underwater vehicle that can be equipped with conventional and nuclear ammunition.

The head of state stressed that the growing military power of Russia – is a reliable guarantee of peace on the planet, and all work on strengthening of defensibility of the country was held within the framework of existing agreements in the field of arms control.

Later the head a press-services of the Department of state Heather Nauert said that Putin’s statements about the development and testing of new types of weapons of concern to the United States, and also expressed the opinion that the words of the Russian leader allegedly confirmed by the fact that Moscow was “directly in breach of its obligations under the [international] agreements,” including the INF Treaty.