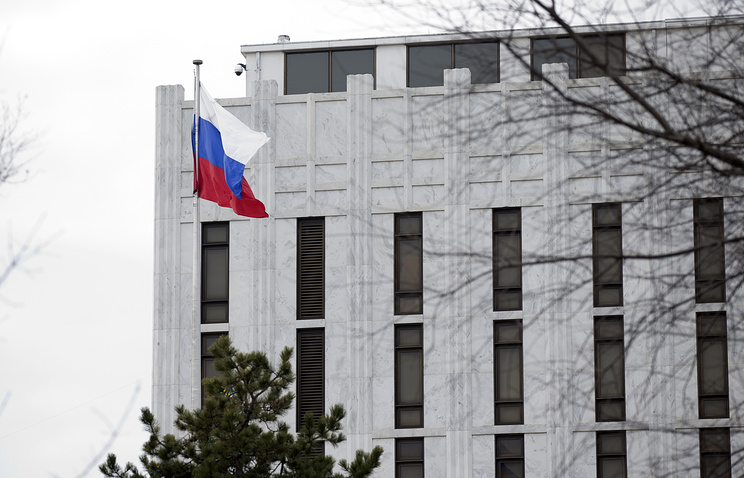 WASHINGTON, March 2. /TASS/. Statements by representatives of the us administration of the intention to impose on Russia responsible for the alleged use by Damascus of chemical weapons in Syria are the manifestation of cynicism. This is stated in a statement on Thursday the statement of the Russian Embassy in the United States.

“Washington launched a sweeping propaganda campaign, consisting of accusations of Russia’s noncompliance with its obligations in Syria, suggests that it really is not concern about the situation of Syrian civilians, a cold-blooded political calculation: in whatever was to keep extremist enclave in the suburbs of the Syrian capital,” the document reads.

In this case, the Russian Embassy drew attention to the fact that the US “continue to use baseless claims about the use by Damascus of chemical agents as a tool of the anti-Syrian geopolitical engineering”.

“A special manifestation of the cynicism became fresh statements by the representatives of the administration of the intention to impose on Russia responsible for the alleged use of chemical weapons Damascus. This despite the fact that in itself, the administration acknowledged the lack of evidence on this score. They have never been before. Because fake messages completely discredited “White helmets” and other pseudohumanitarian NGOs in Western pleasure, can be considered a cheap farce, not evidence,” reminded the Embassy.

“I would like to warn US against the temptation to use them as pretext for missile strikes on Syrian government targets,” concluded the Embassy.

On Thursday the head a press-services of the Department of state Heather Nauert during the regular press briefing said that the United States did not announce sanctions against anyone, however, Washington is considering a number of opportunities to attract Russia to justice for attacks on civilians in Syria, where the United States accused the Syrian government.

“We will attract Russia to account,” claimed Nauert. In addition, from her point of view, Russia is partially responsible for the fact that Syria has not respected the cease-fire resolution which was adopted last week, the UN Security Council because Moscow is providing assistance to the Syrian government.

The UN security Council on Saturday adopted a resolution requiring the parties to the conflict in Syria to cease hostilities for at least 30 days to provide humanitarian assistance to the population. The document was supported by all 15 member States of the security Council, including Russia. According to the resolution, the truce would not apply to military operations against the group “Islamic state” (IG banned in Russia) and other terrorist organizations.

On Monday, the Russian defense Minister, army General Sergei Shoigu said that on behalf of the President of Russia Vladimir Putin in the Damascus suburb of Eastern ghouta from 27 February introduced the daily humanitarian pause from 09:00 local time (10:00 GMT) to 14:00 (15:00 GMT). In the village of El Vafidin the Syrian authorities with the support of the Russian Center for reconciliation of the warring parties prepared the conditions for the reception of the civilian population through a single humanitarian corridor that links Damascus with Eastern Ghouta.