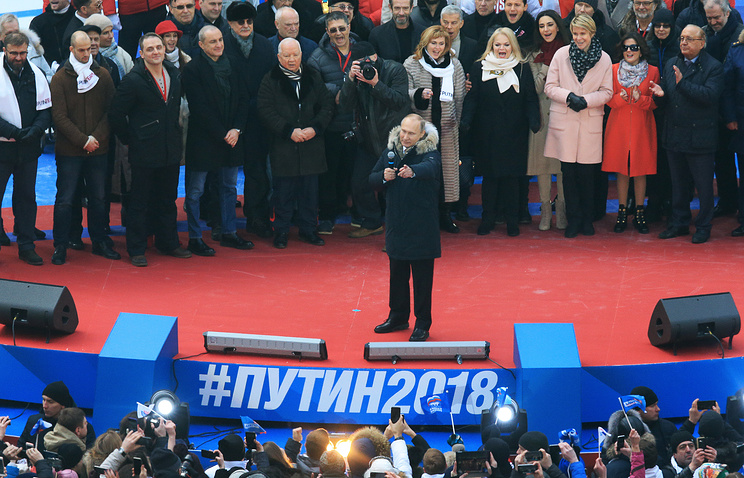 MOSCOW, March 3. /TASS/. Vladimir Putin, who is running for a new term as President of the Russian Federation, arrived on held on Saturday at the Luzhniki stadium rally his supporters.

The law “On elections of the President of the Russian Federation” obliges candidates working on state or municipal service, as well as in the media, to take a vacation from the date of registration and elections before election day. However, the President replaces state office, and this requirement does not apply.

This was confirmed by TASS press Secretary of the President Dmitry Peskov, answering the question, did Putin leave in order to participate in today’s event. “No, he shouldn’t do it”, – said Peskov. “Officials should. I’m on vacation,” he explained.

The rally under the slogan “For a strong Russia!” started on Saturday around noon. The participants of the rally will address about a dozen of trusted persons of the candidate, including Director Nikita Mikhalkov, cardiac surgeon Leo Bokeria, artistic Director of the Mariinsky theatre, conductor Valery Gergiev. Some artists have already addressed the gathering.

According to the forecasts of Putin’s election headquarters, the meeting will be attended by at least 100 thousand people.

As noted by the press-Secretary of Putin’s staff, Andrei Kondrashov, the event “paid from electoral Fund”, the entire amount will be presented in the statement of the candidate, which will be published on the website of the Central election Commission of the Russian Federation.