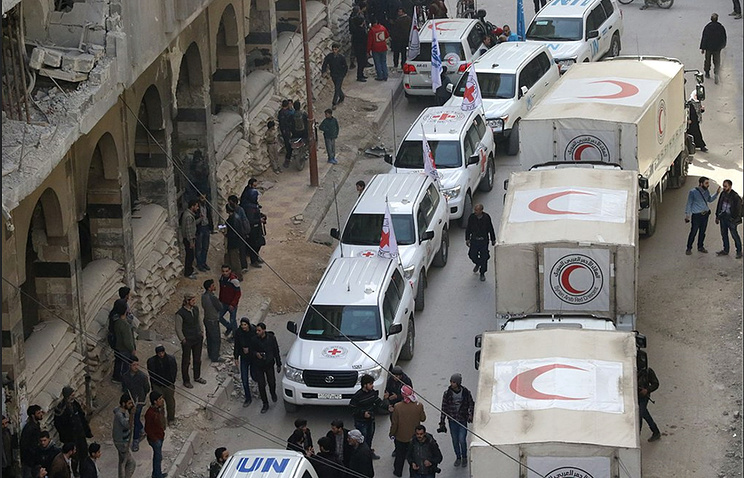 WINDHOEK, March 5. /TASS/. Russia is increasing evidence that the US wants to withdraw from the blow of a terrorist group “Dzhebhat an-Nusra” (banned in Russia) and to preserve it for regime change in Damascus. This was stated on Monday the Minister of foreign Affairs of the Russian Federation Sergey Lavrov during a press conference with Deputy Prime Minister and Minister of foreign Affairs and cooperation Namibia netumbo Nandi-Ndaitwah.

“We have increasing evidence that our Western partners, primarily the United States, would like “dzhebhat an-Nusra”, which is now changing its names, but its essence does not change, withdraw from the blow, and to preserve it in case more and more revealing plans to return to plan “B”, that is, to endeavor to change the regime in Damascus,” – said the Russian Minister.

According to him, according to information from various sources, the US-led international coalition has plans for the collapse of Syria. “This is another confirmation of the contractual engagements of our Western partners, which in practical terms stand on the course, which is directly contrary to UN security Council resolutions, including continuously reaffirmed respect for the sovereignty and territorial integrity of Syria, said Lavrov. – It is necessary to work honestly. Unfortunately, this side of our Western colleagues is not enough.”

The head of the Russian foreign Ministry noted that the fight against this group in the Eastern ghouta are absolutely legitimate. “Syria is not the only topic on which we are trying to put pressure. Many other topics, topical issues of the international agenda are also subject to attempts to put pressure on Russia, – said Lavrov. I even heard that the latest wave of cold in Europe also applies to the actions of Russia”.

“We always do what we agreed. Speaking of Eastern ghouta, we completely, one hundred percent committed to UN security Council resolution 2401, – said the head of the foreign Ministry. – The main point of the resolution requires all Syrian parties to negotiate a cease-fire to provide at least a 30-day pause for the delivery of humanitarian aid”.

According to the Minister, the Western partners prefer to ignore this paragraph and insist that “the Syrian government unilaterally stopped fighting, and Russia stopped the fighting to support.” “These steps of the Syrian leadership, with our support, aimed at the suppression of “Dzhebhat EN-Nusra”, which is a terrorist organization and, in accordance with UN security Council resolution does not fall under the cessation of hostilities, he stressed. – Against the terrorists during the action of the resolution to the consistent and uncompromising struggle is absolutely legitimate.”