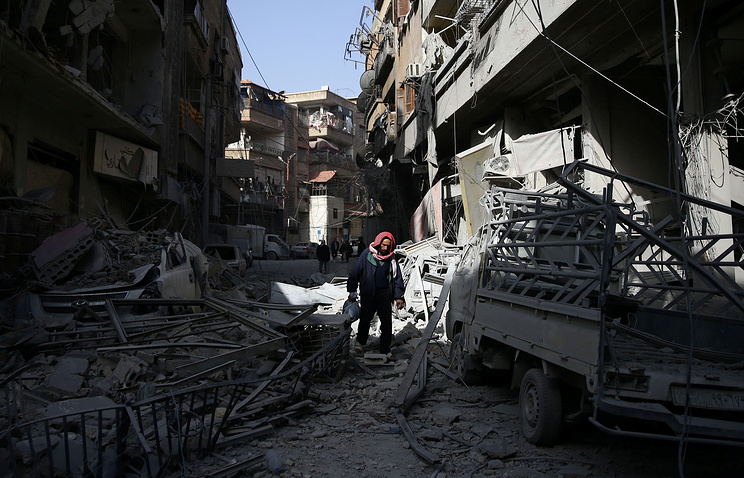 EAST GHOUTA /Syria/, March 8. /TASS/. The civilians of Eastern ghouta send a treatment Center reconciliation of the warring parties in Syria, reporting on the readiness to leave the area, but the leaders of the militants are making every effort to prevent the release, said the representative of the Centre the General-major Vladimir Zolotukhin.

“For that illegal armed groups have intensified repressive measures against the population and increased the intensity of the shelling of the checkpoint in the village of El Vafidin. Fire is including during the humanitarian pause, in this connection at the moment to get out of the enclave to the checkpoint no one succeeded,” he said.

According to him, the situation in the area remains difficult and tense. “For the past day the militants of the East Guta was once again shelled residential neighborhoods of Damascus and nearby suburbs. It was released eight minutes, injuring nine civilians, there is destruction,” – said Zolotukhin.

“Open a humanitarian corridor for civilians in Eastern ghouta, and militants with their families. Their safety is assured, providing transport and protection for their entire route,” added the General.

Zolotukhin also said that in connection with the actions of the militants in several towns of Syria recorded excitement.

According to him, the actions of the militants has caused “spontaneous excitement in the settlements Misraba, Madiera, Jamuria, Sakba, Ayn Terma, Giran, Arbil and the Duma”.

“Moreover, there is evidence that among the rank and file militants appeared willing to leave Eastern ghouta, including with their families. However, their leaders are strongly against and threatened with death any potential defectors,” said he.

“Given the current situation, once again call on the leaders of the militants to give the opportunity to leave Eastern ghouta everyone under our guarantee of security”, – said Zolotukhin.