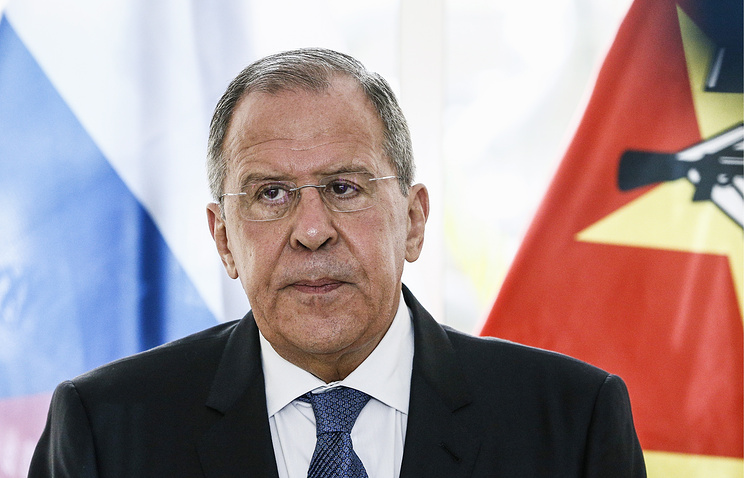 HARARE, 8 March. /Spec. Q. Maria Khrenova TASS/. The Minister of foreign Affairs of Russia Sergey Lavrov on Thursday held talks with the new President of Zimbabwe Emmerson Mnangagwa and foreign Minister Sibusiso Moyo. The sides discussed prospects of cooperation in the field of diamond production and the military-technical cooperation (MTC), have signed a number of memoranda, discussed the interest of Russian companies in establishing partnerships.

During his visit Lavrov also struck up a correspondence debate with an American colleague Rex Tillerson, who has previously said that African countries should pay attention to agreements with China on loans and to prevent infringement of its sovereignty.

The Message To Putin

As reported TASS a source close to the negotiations, it is especially important to strengthen contacts with the new government of this African country, which came to power recently after the removal of President Robert Mugabe, who ruled for 37 years. In November 2017, the army forced him to resign, and then the ruling party the “African national Union of Zimbabwe – Patriotic front” has appointed the new leader of the Mnangagwa.

Lavrov gave a new Zimbabwean leader a message from the President of Russia Vladimir Putin, which expressed support for efforts to stabilize the situation in the country, consolidation of society and the development of comprehensive cooperation with those countries who are willing to help Zimbabwe in addressing the country’s goals.

While in Zimbabwe in all felt strong stratification into rich and poor, which according to the experts, and led to the resignation of the previous President.

Competition in the region

Western and Russian researchers say that now there is a new “scramble for Africa” as a continent rich in natural resources. “Players-giants are China, the EU (as a bloc of States), United States, India, and are also interested in expanding cooperation with Africa, Brazil, Turkey, Iran, South Korea, Gulf countries”, – said in an interview with TASS, senior research fellow, Institute of African studies Olga Kulkova.

It is not surprising that Russia’s return to the continent caused the disapproval of the United States. State Department spokesman Heather Nauert said recently to journalists that the U.S. is concerned about loans that African countries receive from China and Russia.

Tillerson himself after Lavrov also went on a tour to Africa, during which he will visit Chad, Djibouti, Ethiopia, Kenya and Nigeria. As informs Bi-bi-si, he critically spoke about the relationship of Africa and China, expressing the view that China’s policy to Africa threatens economic and political stability of the countries of the continent.

The Minister of foreign Affairs of Russia, answering a request to comment on the statement by U.S. colleagues, said that the Tillerson would be incorrect to give a negative response relations of African countries and Beijing, during a visit to African States. “I didn’t know that Rex Tillerson, a specialist on Sino-African relations, but it seems to me, is not quite correct, being in guests to speak about the relations of their hosts with other countries, even in such a negative way, – he stressed. – Of course, if this is true, but I have not seen such messages.”

Following the visit, Lavrov said that he discussed with the President of Zimbabwe, the prospects of cooperation between the two countries in the field of diamond production and the military-technical cooperation.

According to the head of the Russian foreign Ministry, special attention was also paid to the implementation of the project development of one of the world’s largest platinum deposits in Darwendale. The joint Russian-Zimbabwean venture Great Dyke Investments (Pvt) Ltd, which is developing the field, is the largest current project with participation of Russia on the territory of the country. Field after commissioning can enter into the five largest in the world in production of platinum group metals.

The Russian side also informed his colleagues in Zimbabwe, about the interest of Russian companies in establishing partnerships. “KAMAZ, “Rostselmash”, “URALCHEM”, “Rosgeologiya” and others”, – said Lavrov.

The visit to Ethiopia

After the visit to Harare Lavrov goes to the final point in its Africa program – Ethiopia. March 9, he will hold talks with Prime Minister Hailemariam Dessalines, President Mulatu Teshome and foreign Minister Workneh, Gebeyehu.

In Addis Ababa are located the headquarters of the African Union in this regard, Lavrov is also scheduled to meet with the Chairman of the Commission of the organization of Moussa Faki Mahamat of the.

Until recently, the Lavrov’s visit to Addis Ababa attracted the attention of international observers, including because there could be a meeting with Tillerson.

On March 5, Deputy foreign Minister Sergei Ryabkov said that Russia has proposed to host the talks between foreign Ministers. However, the next day Nauert said that Washington had not received such proposals from Moscow.

The Embassy of the Russian Federation in the United States called such claims a “distortion of reality” and “misinformation”, explaining that the request for the meeting with Lavrov Tillerson was sent to the state Department on March 2.

“With the complicated situation. Two Ministers will be at the same time in the same hotel. This is a great opportunity to talk through the press, and directly. To discuss the complex accumulated issues of regional and global agenda”, according to the Embassy.

He later Lavrov called a lie the allegations of the state Department that discussed his possible meeting in Ethiopia with Tillerson was not conducted.