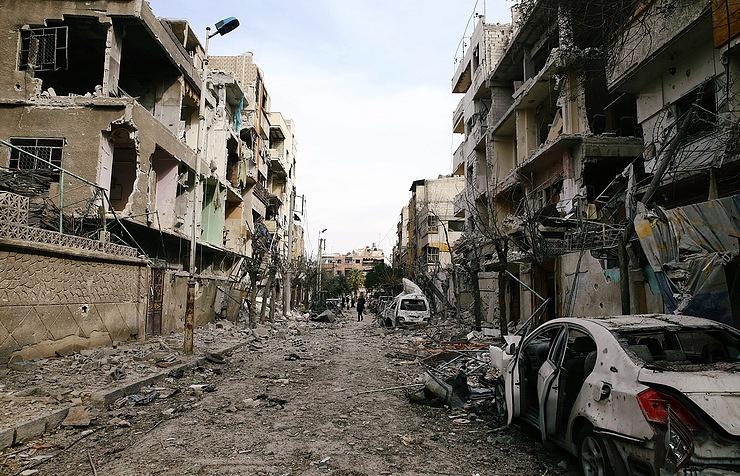 “Also, individual members of the illegal armed groups have intensified output on Syrian government forces and the Russian Center for reconciliation of the warring parties to discuss the issue of demarcation of the prohibited terrorist organization “dzhebhat an-Nusra” – said Yevtushenko.

He stressed that the situation in Eastern ghouta remains difficult.

“The second day continues to operate a temporary corridor in the direction of Giran – Mlekh. Deployed the necessary infrastructure. On duty ambulance. In readiness are medical service, food Bank hot meals and transport for the civilians to safe areas,” he said.

In his words, “efforts to normalize the situation in the area of humanitarian corridor to the checkpoint near the settlement of El Vafidin”.

Yevtushenkov said the joint Coordination center in the last few days noted a reduction in the number of violations of the cessation of hostilities.

“The restoration of the destroyed social infrastructure and the establishment of peace in the Syrian provinces facilitates the return of people to places of former residence. So, in their homes in HOMS province returned 31 people in the province of Deir ez-Zor on the East Bank of the Euphrates river – 308”, – he said.

The General noted that on 9 March, representatives of the Center for conciliation to ensure the safe and unhindered passage of humanitarian convoys, the UN and Syrian Arab red Crescent in the Duma.

“13 trucks in need of the city was delivered to 74 tons of food and medicines”, – said the head of the centre.

He also said that the inhabitants of the village Darwesh the province of Damascus had delivered food and medical supplies with a total weight of 1.9 tonnes, the Russian military doctors during the day, medical assistance, 66 Syrians, including 27 children.