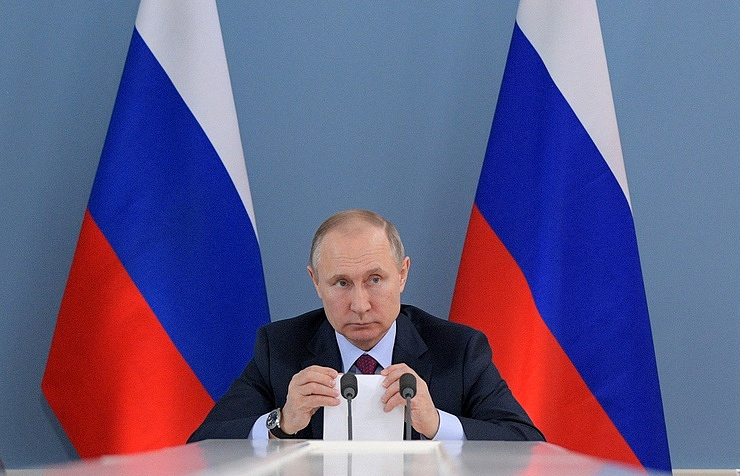 NEW YORK, March 10. /TASS/. Russia will never give US of those whom Washington accused of meddling in the American elections in 2016. This was stated by the President of the Russian Federation Vladimir Putin in interview to TV channel NBC, which was aired on Friday.

“Never. Russia does not extradite its own citizens, as the United States,” Putin said, responding to a question. His words were given in English translation.

“Unless the United States will extradite its citizens to anyone?” the President noted. “This is the first. Secondly, I do not see that they have done something illegal,” he added.

The head of state does not exclude that the Russians, whom the US accused of meddling in elections, to work on the American side. Putin said that these people “are not civil servants” and “do not represent the government and the interests of the Russian state”. The President noted that we can talk about the persons with multiple citizenship or those who have a residence permit in the United States.

“Maybe the Americans paid them for this work, how do you know? I don’t know,” said Putin. He also did not rule out that these persons, “being in Russia, working for the American company.” “Maybe some of them worked for some of the candidates [in the U.S.],” – added the Russian head of state.

The President reiterated that persons accused Washington of meddling in the American elections in 2016, were not the representatives of the Russian government. “Well, if they are Russian? Russian all 146 million, so what?” – said Putin.

According to the President, some persons in order “to use certain tools in other countries.” They could send information “from France, from Germany, from Asia, from Russia”, said the head of state. “What does this have to do with us?” he asked.

Moscow does not encourage interference in elections

Putin also said that Russia did not even see the point of meddling in the presidential election in the United States.

“We do not set ourselves such a goal, as intervention in the elections. We can’t see what goal we can achieve through such intervention. We have no such goal,” the President said.

“Let’s imagine that we have set ourselves the goal to intervene. For what? Intervene only in order to intervene? What is the purpose?” – the President added.

Putin stressed that Russia does not encourage interference in elections in other States and is not engaged in such actions.

Answering the question, whether Russia encourages actions aimed at interference in the political processes in other countries, the Russian leader said, “No. We don’t encourage them and don’t give the orders [of such acts]”.

The President of the United States Donald trump and his key aides repeatedly rejected suspicions of any improper contacts with Russian officials during the election campaign. Moscow has many times denied allegations of attempts to influence the presidential elections in the United States.

Accusations of “Agency of Internet research”

Vladimir Putin said in an interview with NBC that the entrepreneur Yevgeny Prigozhin, accused the US of meddling in American elections, is not his friend.

“I know this person, but I wouldn’t consider it one of my friends. This is turning the facts inside out”, he said. “There is such a businessman, he engaged in the restaurant business and some others, but it is not a state employee. We do not have any relation to it”, – said the Russian leader.

February 16, the U.S. government charges against 13 citizens of Russia and three Russian organizations in attempts to interfere in the political processes and the election of the presidential race of 2016. The indictment was prepared by the office of spectracolor Robert Mueller. Among the accused Prigogine and 12 employees of the “Agency of Internet research”.

Leading NBC Megyn Kelly asked Putin if he made contact with Prigogine thereafter. The Russian President said that didn’t do it, he has “other things to do and problems”.

“He’s not my friend. I know this man, but he’s not in the list of my friends, – continued the head of state. – He’s famous, so what? In Russia, a lot of famous people”.

Putin also denied allegations of a number of American individuals about what Prigogine supposedly doing his “dirty work”. “I don’t do no dirty work. Everything I do I do openly. Is it a stamp you – you have someone who likes to do the dirty work and you think we are doing the same, but this is not so,” he said.

Kelly asked him to comment on reports in the U.S. press about the involvement of Prigogine to private military groups in Syria, which is composed of Russians. “This person can be a variety of interests, including, for example, the energy industry in Syria. However, we did not support it. We don’t help him” – said Putin.