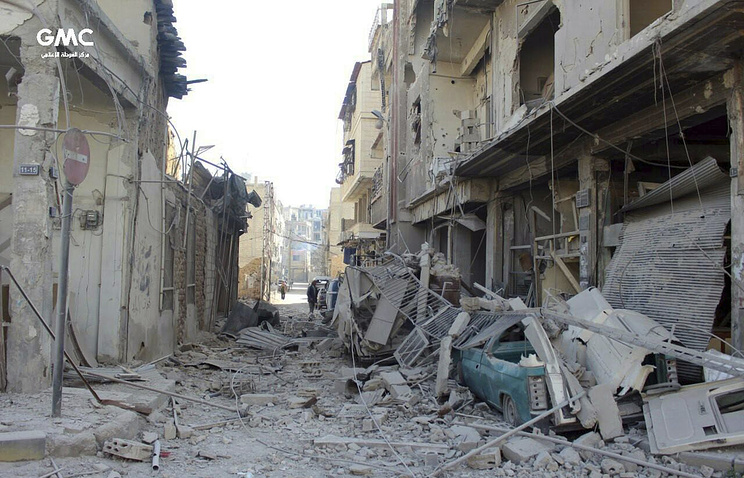 The EL VAFIDIN /Syria/, March 10. /TASS/. The center for conciliation of the warring parties in Syria is negotiating the exit of Eastern Guta of leaders of illegal armed groups, told reporters on Saturday the representative of the Centre the General-major Vladimir Zolotukhin. According to him, on the eve of 13 militants left the Eastern ghouta, taking advantage of a humanitarian corridor in the village of El Vafidin.

“Intense negotiations are continuing between representatives of the Center for conciliation of the warring parties and the leaders of the illegal armed groups of the Syrian opposition with the aim to reach agreement on the withdrawal from the zone of de-escalation “Eastern ghouta” of the second stage of militants,” – said Zolotukhin.

“There continues shelling of residential areas of Damascus and surrounding suburbs, which for the past day the militants of the East Guta was released 12 mines of calibre of 120 mm. There are numerous destruction, killed one person and wounded nine civilians,” the General added.

From 9 to 14 hours (from 10 to 15 GMT) Saturday was the twelfth account of the humanitarian pause declared with the goal to provide a way out of the Eastern Guta of civilians as well as militants with their families, who are guaranteed security, transportation and security throughout the route.

“In addition, continues to operate an additional checkpoint in the area of the settlement, Goran in the South Eastern Guta. Here deployed a medical center, food Bank hot meals, organized duty vehicles for transporting civilians to safe areas,” – said Zolotukhin.

The hotline of the Center for conciliation also continues to receive reports about the plight of the population of Eastern ghouta. “In Kafr Batna, clashes took place between local residents, supporters of the regime fighters and loyal to the legitimate government of the SAR”, – said the representative of the Centre.