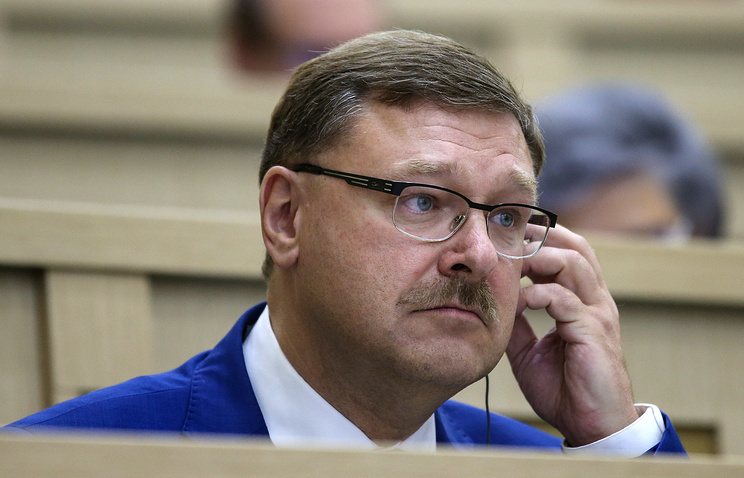 MOSCOW, March 12. /TASS/. The European Union, stating the refusal to recognize the results of presidential elections in the Crimea, trying in unison with the West, supposedly to protect the rights of the Crimean people, ignoring their will. This opinion was expressed on Monday by TASS, the head of the Federation Council Committee on international Affairs Konstantin Kosachev, commenting on the statement by the EU high representative for foreign Affairs and security policy Federica Mogherini on the EU’s refusal to recognize the results of elections in Crimea.

Informed Mogherini at the joint press conference with President of Ukraine Petro Poroshenko in Kiev that the EU does not recognize the elections of the President of Russia on the territory of Crimea which on 18 March 2018.

According to Kosachev, the words of Mogherini, who also said not to recognize elections in Crimea and said that MEPs will be encouraged to respect the rights of people living there are “another example of the prevailing today in the West of doublethink”. “The EU does not recognize the results of the implementation of the people in the Crimea their right to vote, but requires respect for the rights of these people. This, alas, is really a actual reality in the minds of European politicians: they are supposedly fighting for the rights of the Crimean people, completely denying the results of a popular vote in 2014, supporting every possible blockade and sanctions against them that infringe the basic rights and freedoms of people living on the Peninsula”, – said the Senator.

“The EU should learn to admit that free democratic choice is not synonymous with Pro-Western. This would be the key to the solution of the most disputed topics in Europe. Learn to notice people, not territory. Ukraine has lost Crimea because have not learned this basic truth,” – said Kosachev.

He also added that the European Union mouth Mogherini shows that the EU is “far from understanding these basics”. “For the West the rights of the Crimean people is the wishes of a small group of their political allies, but in reality it is millions of people being punished for their free choice”, – said the MP.

After the coup in Kiev in February 2014, the authorities of Crimea and Sevastopol made the decision to hold a referendum on reunification with Russia; in the vote, which took place on 16 March of the same year, took part more than 80% of eligible voters. For reunification with Russia voted, respectively, of 96.7% and 95.6% of residents of Crimea and Sevastopol. 18 March the President of Russia signed the agreement on the accession of the Republic of Crimea and Sevastopol into the Russian Federation, and on March 21 the document was ratified by the Federal Assembly. Despite the strong results of the referendum, Kiev refused to recognize Crimea part of Russia.