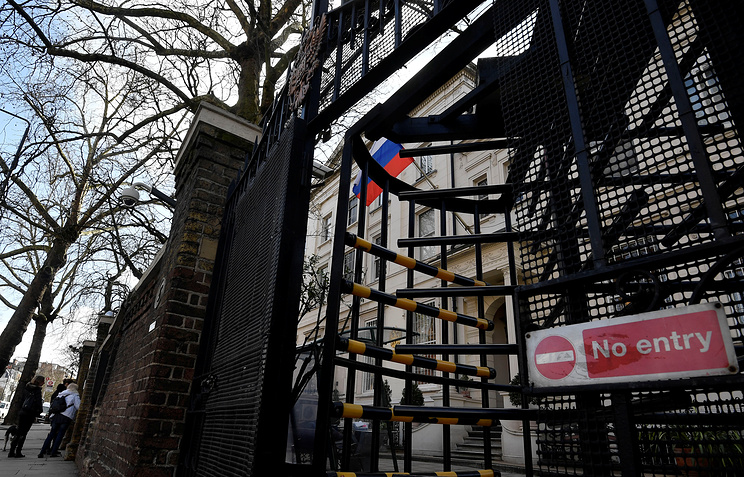 LONDON, March 16. /TASS/. Russian diplomats expelled from Britain in connection with the case Skripal, leave the country with family members on March 20. This was announced on Friday in an interview with Russian journalists, the Russian Ambassador in London Alexander Yakovenko.

“They will leave on the 20th. Together with families we are talking about approximately eight dozen people,” the diplomat said, answering a question of the correspondent of TASS.

While Yakovenko rejected suggestions that the expelled diplomats are related to intelligence. “It’s such a legend, which is actively spreading, complete nonsense,” – said the Ambassador, noting that we have to leave almost half of the Embassy staff.

“These people – ordinary diplomats, 40% of the Embassy. It has always been not very big, because before the British resorted to expulsions, and so the Embassy staff had steadily declined, and now we are in this, I would say, a truncated part, – said Yakovenko. But further expulsion, of course, reduces the capacity of the Embassy, I think that first of all, the consular direction.” “This creates certain difficulties but, nevertheless, most people know the country in which they work and, in principle, in the current environment, every diplomat is ready for any eventuality,” said the Ambassador.

On March 4, former GRU Colonel Sergei Skripal, sentenced in Russia for espionage in favour of great Britain, and his daughter Julia have been exposed to nerve agents. They were found unconscious in Salisbury (140 miles from London), now both are in hospital in critical condition.

The British authorities accused Russia of involvement in the poisoning, but any evidence was not presented. Prime Minister Theresa may announced on 23 expulsion of Russian diplomats and the suspension of bilateral contacts at a high level. The Russian side categorically denies any involvement in the incident and announced the imminent adoption of retaliatory steps, including the expulsion of British diplomats.