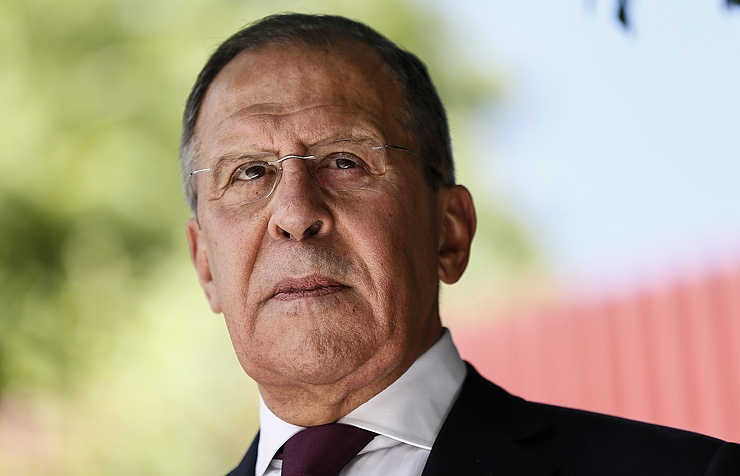 MOSCOW, March 16. /TASS/. The global missile defence system (ABM) was created by the United States not for protection from the threat supposedly posed by Iran and North Korea, and in order to surround the area of Russia around the perimeter of the border. This was stated by Russian foreign Minister Sergei Lavrov in an interview to the media of Vietnam and Japan on the eve of the visits to these countries.

According to him, the past 15 years, Moscow is trying to convince Washington of the evils of his decision to withdraw from the Treaty on the limitation of ABM systems. “We tried to create a mechanism of joint review of protection against ballistic missiles, all our efforts were in vain, – said the Minister. – Everything that makes our American colleagues, tried to convince us that this global missile defense system is not created to counter threats emanating from Iran and North Korea, and in order to surround the Russian Federation around the perimeter of these missile systems, which, according to our military, was really intended to devalue our strategic nuclear potential”.

“We honestly say to our Japanese friends explain that in order to remove all the irritants in our relations, as agreed by Russian President [Vladimir Putin] and the Prime Minister of Japan [Shinzo Abe] – remove stimulus, deepen cooperation and build up strategic and friendly relations in order to achieve this aim move you’ll have to consider those matters which we are discussing now is how to map the problem of removing the problems in our relationship with what American missile defense represents a threat to us will be on Japanese territory,” – said the head of the foreign Ministry.

He also stressed that a sustainable solution to security issues in the Asia-Pacific region can be taken not using the block approach, but only on an inclusive basis, when “all interested parties sit at the same table to Express their concerns and begin negotiations designed to work out common denominator”. “It’s a Japanese sovereign right to make decisions about military alliances, our sovereign right – to make conclusions about how these arrangements, particularly the missile defense system, affect our safety, – said Lavrov. – I think no one here should be no hard feelings. We are ready to dialogue, including on the subject”.

Plans of military cooperation of the USA and Japan, including placement on the Japanese Islands elements of a global missile defence system (NMD) of the United States, affect the national security of Russia, which Moscow says frankly partners in Tokyo. This was also stated Sergey Lavrov.

“We frankly say to our Japanese friends that Japan’s relations with the United States in the military sphere, including plans that are already beginning to materialize in the deployment on the Japanese Islands, along with the Republic of Korea, the Asian segment of the global US missile defence directly affect the issues of ensuring national security of the Russian Federation”, – said Lavrov.

However, he stressed that Japan, of course, is a sovereign state, make their own decisions on the basis of its foreign and defense policy. “This fully applies to the terms on which operates Japan Alliance with the United States. Neither here nor in any other case, we cannot dictate – it is not our methods to make demands, ultimatums,” – said the Minister of foreign Affairs of the Russian Federation.

19 December 2017, the Japanese government adopted the decision on placement in the North and the South-West of the main island of the country of Honshu, roughly in 2023, two us Aegis Ashore missile defense systems, which assures Tokyo needs to protect the country against attacks from ballistic and possibly cruise missiles. These complexes will be purchased in the US and will cost about 100 billion yen (about $889 million) each.

As previously warned by the official representative of Russian foreign Ministry Maria Zakharova, the transfer to Japan of ground-based missile defense systems Aegis Ashore will negatively affect relations between Moscow and Tokyo, including the dialogue on the peace Treaty. She noticed that the complexes are equipped with the universal vertical launchers (WITU) Mk 41, which is able to apply and impact weapons. According to her, this would be a violation of the Treaty on the elimination of intermediate-range and shorter-range.

The head of the Russian foreign Ministry noted that Moscow is ready to resume consultations on strategic stability with U.S. counterparts and will not make this dialogue any secrets.

As the Minister noted, today the Washington consistently refuses to dialogue on missile defence. “However, recently they re-confirmed their interest to resume consultations on strategic stability with the Russian Federation, – noted the head of the Russian depodesta. – We are ready and will be in touch with our Japanese neighbours, to inform them of our assessment of how those consultations with the Americans develop. Will not do this any secrets.”

Lavrov stressed that Tokyo has the right to choose methods of ensuring their security, the choice of its partners, as well as forms of military cooperation with them. “We certainly have every right to assess how these arrangements on our borders affect the security of the Russian Federation”, – he added.

Russian-American talks on strategic stability and resolving problems in bilateral relations are chaired by the Deputy Minister of foreign Affairs of Russia Sergey Ryabkov and senior Deputy Secretary of state Thomas Shannon. March 8 Shannon TASS said that he expects offers from Ryabkova to agree on the date and venue of the next round of consultations.