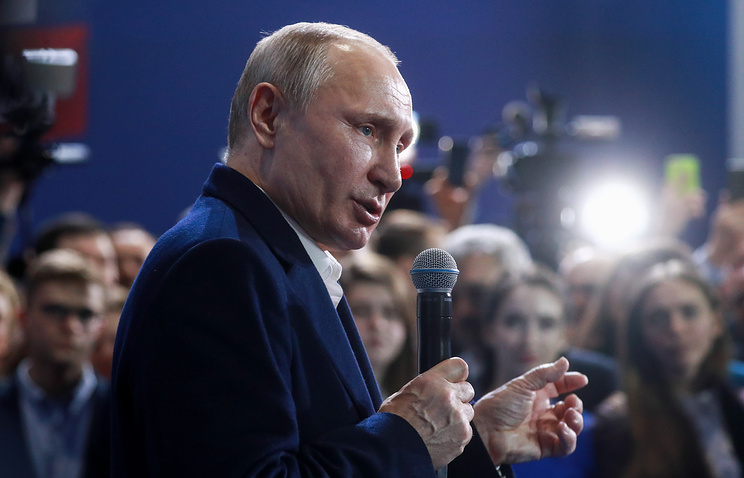 MOSCOW, March 19. /TASS/. Russia’s President Vladimir Putin is leading in the presidential elections, gaining 76,65% of the vote after 99% of the final PEC protocols. The candidate from the Communist party Pavel Grudinin ranked second with 11.82% of the votes. In third place – the candidate from the party of LDPR Vladimir Zhirinovsky from 5.68%. It is reported by the CEC.

For Vladimir Putin in absolute numbers voted, according to the latest data, more than 55,403 million people. For Grudinina voted in excess of 8.54 million people. Zhirinovsky – about 4,104 million

Fourth place is an extended “Civil initiative” Ksenia Sobchak from 1.66% of the vote. For her voice gave over 1,197 million people. It is followed by Grigory Yavlinsky (Yabloko) from 1.04% of votes. The other candidates received less than 1% of the vote. So, for Yavlinsky followed by Boris Titov (Batch growth) of 0.75% of the vote, Maxim suraykin (“Communists of Russia”) of 0.68% and Sergei Baburin (“Russian national Union”) with 0.65% of the votes.

In the future, these numbers may change only by a fraction of a percent, which seriously did not adjust the final result. Thus, according to reports, Putin received almost 3.5 times more than all its competitors put together (22,28%) and almost 6.5 times more than the nearest opponent. For comparison, in 2012, Putin has surpassed its nearest rival – the Communist party leader Gennady Zyuganov – by 3.7 times.

At the moment well-known turnout for 95% of polling stations – it is 67%. In correlation with these data and the total number of voters (about 107 million people) recruited Putin percent say they voted for him the majority of Russians, having active suffrage.