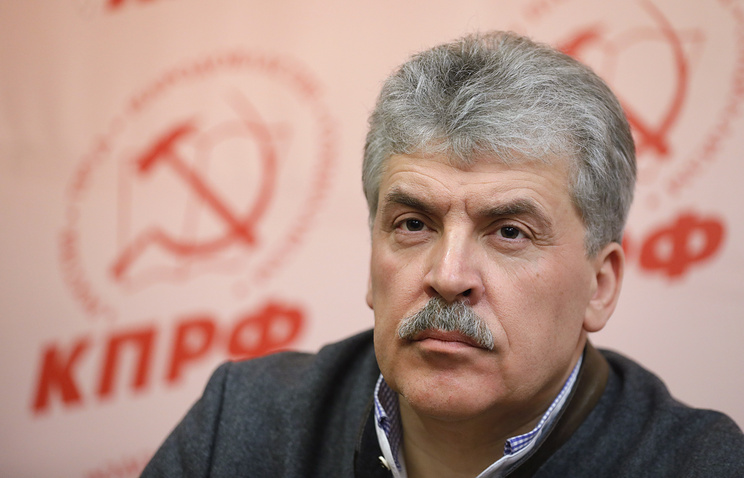 MOSCOW, March 19. /TASS/. The candidate of the Communist party Pavel Grudinin at the election of the President of the Russian Federation on 18 March showed the worst result for all time of participation of the party in election campaigns at this level.

According to 6:00, in the whole of Russia after processing 99% of the protocols of the acting President Vladimir Putin, running as self-nominated candidates, winning a record 76,65% of the vote. In second place was the candidate from the Communist party Pavel Grudinin from 11.82% of the vote, in third place – the candidate from LDPR Vladimir Zhirinovsky from 5.68%.

How to vote for the Communists

The Communist party participated in all presidential election campaigns since 1996, in all elections except 2004, the party nominated its leader Gennady Zyuganov. The 1996 elections were held in two rounds, in the second Zyuganov competed with Boris Yeltsin, who was then President of the Russian Federation, and received of 40.31% (against 53,82% Yeltsin).

All subsequent presidential campaign was held in one round, the representatives of the Communist party have always occupied according to their results second places. In 2000 Zyuganov has lost to Putin, receiving of 29.21% (Putin – 52,94%), in 2004 elections he ran for the Communist Nikolai Kharitonov, he scored to 13.69% (Putin – of 71.31%). In 2008, Zyuganov was again taken part in the elections and obtained the results support 17,72% of the electorate, losing to Dmitry Medvedev (of 70.28%). Finally, in 2012, Communist party leader scored 17,18%, the Russian President was elected Vladimir Putin (63.6 per cent).

Thus, dynamics of results indicates that, with the exception of the 2004 election, from the campaign to the campaign score of the Communist candidate in the presidential election decreased. And the lowest was recorded in the past on the eve of the vote that the Communist party first put forward a non-partisan businessman Grudinina.

Somewhere in the middle

As for the other Russia’s oldest party, the liberal democratic party, she participated in the presidential elections since 1991, not rising above the third place.

The results of the first campaign, the leader of LDPR Vladimir Zhirinovsky became the third from 7.81% after Yeltsin and Nikolai Ryzhkov. In 1996, Zhirinovsky again participated in elections, which gained 5.7 percent (fifth out of ten candidates). In the 2000 elections, Zhirinovsky voted 2.7% of voters, and he took over fifth place, but among the 11 candidates.

In 2004, Zhirinovsky in the elections did not participate, instead of putting his former bodyguard Oleg Malyshkin, who finished the campaign with 2% of votes.

In 2008, the leader of the liberal democratic party re-entered the election campaign and took her third place (9,35%) of the four candidates, losing to Medvedev and Zyuganov. At the end of the previous campaign, Zhirinovsky became the fourth from 6.22%, behind Putin, Zyuganov and businessman Mikhail Prokhorov, who ran as self-nominated candidates.

The Result Is “Apple”

Another veteran of Russian politics – one of the founders of the party “Yabloko” Grigory Yavlinsky participated in the presidential campaigns four times, three times participated directly in the elections. The past on the eve of the vote also demonstrated the lowest for this electoral history, the rating of the candidate.

For the first time, Yavlinsky ran for the presidency in 1996, where he finished fourth with 7.34 per cent of votes. Four years later he gained 5.8 percent (third place).

Then 12 years he participated in the presidential campaigns, but, is nominated for the 2012 election, was not able to finish because it has not been registered as a candidate due to the large marriage in subscription lists.

After processing 99% of protocols on the election results, 18 March 2018 Yavlinsky gets a total of 1.04%, second to Putin, Grudinin, Zhirinovsky and the candidate of the party “Civil initiative” Ksenia Sobchak.