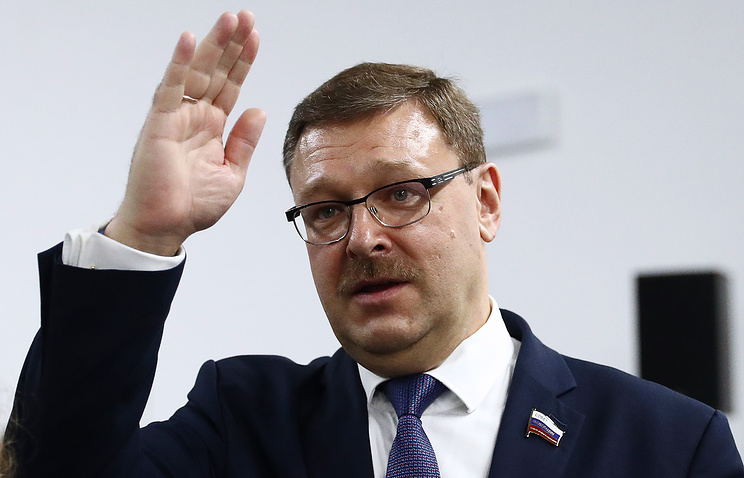 MOSCOW, March 19. /TASS/. Preliminary results of last elections in Russia in which acting President Vladimir Putin wins a landslide victory, show that attempts to create external conflict in the country between the government and the society failed. This opinion was expressed by the head of the Federation Council Committee on international Affairs Konstantin Kosachev on Monday at a meeting with member of the European Parliament Stefano Mullu (Italy).

“The line pursued by the incumbent President and in the internal and in foreign policy, enjoys the obvious support of the overwhelming majority of Russian citizens. Among other things, this is a very powerful, clear answer to enemies of Russia abroad, who were trying to create some kind of conflict between the government and the society. These attempts absolutely failed,” – said Kosachev.

He also said that for Putin voted a record number of voters. “These compelling results of the election will be another powerful tool of protection of sovereignty of the Russian Federation and to prevent further interference in our internal Affairs,” added the Senator.

“We had the opportunity and on the eve of elections and on the voting day to talk to many international observers. Those with whom we spoke, no complaints, no remarks about the organization of the elections did not” – said Kosachev.

“On the contrary, there were a lot of compliments in the address of Russia, who managed to organize these elections as democratic as possible and in accordance with the highest international standards”, – said the Senator.

“We are very careful we will treat all comments. We are open to criticism. No one, that is, not perfect. Objective comments will be accepted with gratitude, and biased nitpicking, of course, will be met with opposite feelings,” said Kosachev.

He recalled that a record number of international observers responded to the invitation to come to Russia to follow up the will of citizens of the Russian Federation – a total of more than 1,500 people.

The Central election Commission of Russia on Monday continues to sum up the results of the 18 March presidential elections. At 07:37 MSK processed 99.79% of protocols of precinct election commissions, according to preliminary results of the vote wins the acting President of the Russian Federation Vladimir Putin from 76.67%.