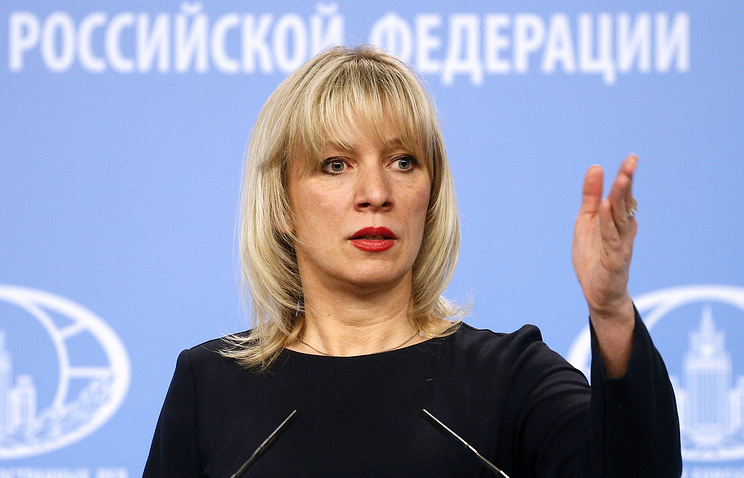 MOSCOW, March 26. /TASS/. Moscow will take measures for each country, the expelling of Russian diplomats, but also the closure of Washington Russian Consulate in Seattle. This was stated on Monday in the program “60 minutes” on TV channel “Russia 1” the official representative of Russian foreign Ministry Maria Zakharova.

“Everything we saw today, will definitely be the answer. For each country, appropriate measures will be taken, – said Zakharov. – And the expulsion of diplomats and the closure of the Consulate General of Russia in Seattle”.

According to Zakharova, the provocation of Salisbury are the United States and the United Kingdom, the expulsion of diplomats leaves no doubt about that.

“If not for these numbers today, one would wonder where all this terrible hell of a performance, which is staged in London, and who really is the beneficiary of this whole situation. At the moment, after it was published these figures, there remains no doubt that the provocation, which was organized in the United Kingdom, are strong, powerful forces that are in the United States of America and in the UK”, – said Zakharov.

She also added that Russia was ready for such actions of the allies of great Britain. “Of course, we realized after the EU summit what was going on. Naturally, we are ready for it,” – said the diplomat.

London presented the only political slogans on the situation in Salisbury is not providing any facts, said Zakharov.

“At the EU summit, the UK did not provide countries with any factual information regarding what occurred on its territory. Was solely political statements, slogans and demands to associate myself with this position,” she said, adding that EU countries demonstrated the political support, not having the slightest idea about the situation of poisoning Skrobala in Salisbury.

In the UK people have written about the British media, including the Guardian, since 1916 there is a Porton Down, in which investigations of chemical weapons, said Zakharov. “It’s not just a chemical laboratory is where tests on people. According to the British correspondent, most of the experiments on human beings in the world was delivered in Porton Down. This is the UK,” she said.

“6 may 2004 the Guardian published an article by Rob Evans, it is available and I hope no one will erase from the site that is completely dedicated to the base Porton Down. This material came out, because in the spring of 2004 it was resumed the investigation into the death of a young pilot who died more than 50 years ago. It had conducted experiments with a chemical which he had extended to the arm, and then he died”. – noted the official representative of the foreign Ministry.

NATO stands behind the EU

Zakharova also said that NATO is behind the actions of the European Union, the Alliance enjoys baculine discipline and intends to demonize Russia.

“Cane discipline, which operates in the European Union . We are well aware who is behind the EU: the EU is NATO. The EU is a beautiful political superstructure , which is the most powerful machine of the North Atlantic Alliance”, – said Zakharov.

“This is the main task of demonizing Russia, which has been delivered. What we see now is a continuation of a long-term program for a rabid Russophobia in action. It is a question not only of Russia as a country, it is a question of the Russians and of the Russian people”, – she noted.

Zakharova also expressed bewilderment about the fact that the country took the decision to expel the diplomats on the day when in the Russian city of Kemerovo was a tragedy that claimed the lives of 64 people. “Unfortunately, our Western colleagues even to this day instead of as civilized, decent people Express sympathy, condolences to the Russian citizens, unfortunately, did what they did,” she said, expressing “sincere condolences” to the families and victims of the fire in the shopping center “Winter cherry” in Kemerovo.

On the expulsion of diplomats

A number of European countries, including France, Germany and Poland, the Baltic States, Ukraine, and the United States and Canada took the decision to expel about 100 Russian diplomats in connection with the poisoning of ex-GRU Colonel Sergei Skripal, in which the Kingdom, without presenting evidence, accused Russia. The announcement to that effect was made on Monday, the Russian foreign Ministry has already said that this unfriendly move will not remain unanswered.

This measure is related to the so-called case Skripal, a former Colonel of the GRU, poisoned, according to of London, with the help of nerve agents. Subsequently, the London issued a statement that this substance was supposedly developed in Russia, and on this basis accused Moscow of involvement in the incident. The Russian side has categorically denied all the speculation, arguing that programmes such substances neither in the USSR nor in Russia did not exist.