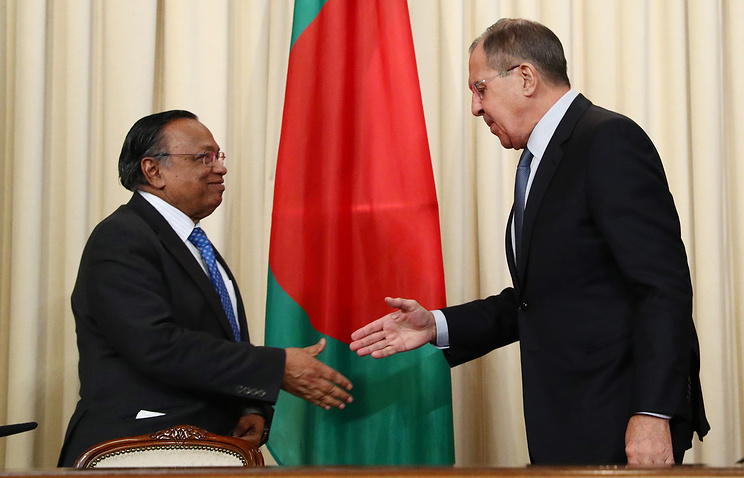 MOSCOW, April 2. /TASS/. The Minister of foreign Affairs of Russia Sergey Lavrov, held on Monday talks with foreign Minister of Bangladesh Aboul Hassan Mahmoud Ali, who is in Moscow on a working visit. Key topics of the meeting were the further promotion of trade-economic relations and the situation of refugees-Rohingya people from Myanmar.

At the beginning of the negotiations, the foreign Minister of Bangladesh stated that the Republic welcome the re-election of Vladimir Putin as President of Russia, and expressed confidence that bilateral relations will continue to strengthen.

Lavrov noted the successful development of relations of the Russian Federation and Bangladesh in political, trade-economic areas. Special attention the Minister paid to the prospects of military-technical cooperation, which, according to him, is actively developing.

To give an impetus to bilateral relations

At a press conference following the talks, the Ministers said that he had discussed the implementation of the first project in Bangladesh rooppur NPP. “We are particularly pleased that we were able to start the project on construction of the first nuclear power plant with substantial support from the Russian Federation. This project was a dream of father of the nation Sheikh Mujibur Rahman,” said Ali.

Also, according to him, the meeting discussed cooperation in development of deposits on the shelf of Bangladesh. “We are pleased to continue cooperation with “Gazprom” company, which is actively working in our country and is developing a number of fields. We plan to begin drilling in the new fields,” said the Bangladeshi Minister.

Meanwhile, Lavrov said that the parties agreed to expedite the signing of several bilateral documents. “Further growth in mutual trade and investment is intended to facilitate the activities established in the past year the intergovernmental Commission on scientific-technical and trade and economic cooperation, we discussed the preparation of its first meeting, the date and venue of which are being clarified”, – said the head of the Russian foreign Ministry.

During the talks, the Bangladeshi side has shared his assessment of the situation of mass influx of refugees-Rohingya people from Myanmar.

In turn, Lavrov said that Moscow supports the agreement between Dhaka and Naypyidaw on repatriation of refugees to Myanmar.

Ali thanked the Russian Minister for the support of the Republic in this matter. He noted that Bangladesh is interested in a speedy return of Rohingya to Myanmar, but found it difficult to name concrete terms of their repatriation, stressing that for this first you need to create the appropriate conditions. “We asked Russia to consider the possibility to contribute to this work”, – said the foreign Minister of Bangladesh.

Answering the journalists ‘ questions, Lavrov once again stated that Moscow has no relation to the poisoning of ex-GRU Colonel Sergei Skripal and his daughter Julia in English Salisbury. “But we are very interested, and, in my opinion, more than anyone else to establish the truth, to know the truth about the fate of our citizens”, – said the diplomat. He called outrageous by the fact that London has not provided Moscow consular access to Russian citizen, and expressed hope that Sergey Skripal, as his daughter, come out of his coma and get better.

He recalled that at the initiative of Russia on April 4 will host an extraordinary session of the Executive Council of the Organization for the prohibition of chemical weapons (OPCW), in anticipation of which the Russian foreign Ministry has prepared specific questions as to the Western countries and the Technical Secretariat of the organization. “The inability of our British colleagues to answer them would mean only one thing – that it’s all fiction or, more specifically, a gross provocation,” he said.

Answering the question about how far can go the mutual expulsion of diplomats, Lavrov said that has to stop the West: “How far we all come in, does not depend on us.” “In diplomacy there is a principle of reciprocity, it has not been canceled, and this principle will be applied sequentially, he said. – Early in childhood we said who started it, and he should stop. We don’t want to be like the games of children, but our partners are doing exactly this.”

The US withdrawal from Syria

Commenting on US President Donald trump intends to withdraw American troops from Syria, Lavrov said that from the beginning they were there illegally, in violation of the UN Charter.

The Minister also noted that in recent months the USA “pretty seriously settled on the East Bank of the Euphrates, a large part of Syrian territory until the border with Iraq.” However, in his opinion, the recent statements of trump means that the American President, “at least, committed to previous statements that the United States withdraw from Syria after the victory over the “Islamic state” (banned in Russia as a terrorist organization)”.