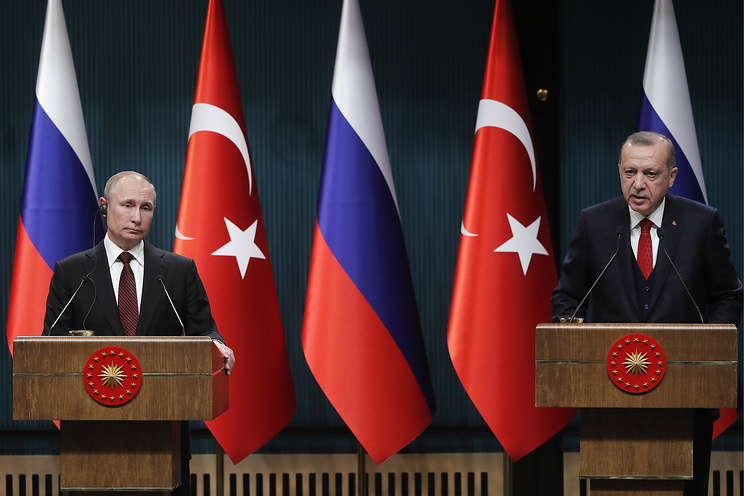 MOSCOW, April 3. /TASS/. Obstacles to the development of relations between Russia and Turkey is not. Ankara is Moscow’s “priority and a very reliable partner”, said Russian President Vladimir Putin at a press conference on the first day of talks with his Turkish counterpart Recep Tayyip Erdogan.

The Turkish leader praised the fact that Putin is his first visit abroad after his re-election for another presidential term, has made it to Turkey. The presidents of the two countries held constructive talks, but in the videoconference launched the start of construction of NPP “Akkuyu.”

At a meeting held following the talks, a press conference Putin and Erdogan answered the questions of military-technical and economic cooperation between the two countries, including the acceleration of deliveries to Turkey of Russian anti-aircraft missile systems s-400 “Triumph”.

The Russian leader also answered the questions of journalists about the so-called business Skrobala, expressing hope that it at the upcoming April 4 session of the Executive Committee of the International organization for the prohibition of chemical weapons (OPCW) will come to an end.

Putin called Turkey to Russia, “the priority and a very reliable partner”. “This applies to enforce our agreements on a number of major regional problems that we face and in which we are interested”, – he added.

“I do not see today any problems that would interfere with the further development of relations with the Turkish Republic”, – said the Russian leader at a press conference held after bilateral talks and a meeting of the Council of high level cooperation between Russia and Turkey. Earlier in the Council meeting, Putin noted that “by the end of 2017, the trade turnover between our countries increased by an impressive 40% to $22 billion.” “I am convinced that this is not the limit”, he added.

In turn, the Turkish President also pointed to the strengthening of Russian-Turkish relations. “Some quarters had attempted to poison relations between our countries. After that, our relationship is only more strongly entrenched. Previously signed today four contracts between Turkey and Russia will also strengthen our relations,” he said at a press conference.

Evidence of the development of fruitful economic cooperation between the two countries, including are the construction of NPP “Akkuyu” and the project “Turkish stream.”

On Tuesday, Putin and Erdogan gave start to the beginning of construction of NPP “Akkuyu.” This plant will be the first nuclear power plant built in Turkey. “During the construction of the station will apply the most advanced engineering solutions, cost effective and reliable technologies – technologies that we are used to in Russia,” – said the Russian President at the groundbreaking ceremony, Recalling that “Russia is one of the recognized leaders in the world of the atom”.

Putin stressed that the construction of Turkey’s first nuclear power plant means the creation in Turkey of the basis for the nuclear industry as a whole. In his opinion, “the introduction of stations in operation to serve the development of economy, scientific and production potential of Turkey will provide Turkish consumers with affordable and clean electricity”.

Then, at a press conference, answering questions about another large-scale Russian-Turkish project, the Russian President stated that “Turkish stream” is being implemented much faster for the project “Nord stream – 2”. “Hopefully, this will end positive result [the establishment of the “Nord stream – 2″], but we are in talks and conversations on this subject with Turkey, we’ll be finished a similar project of the same scale,” – said the Russian leader, adding that “it’s going to almost end”.

In addition, the Russian President said that the relevant agencies of the Russian Federation and Turkey following the talks, the two presidents instructed to study a number of new agreements. “We have outlined specific guidelines for further joint work. Following the talks, signed a package of inter-Agency agreements and commercial documents,” Putin said, stressing that “cooperation between Russia and Turkey is steadily growing”.

Great interest among the journalists was the topic of military-technical cooperation of the Russian Federation and Turkey and, in particular, the acceleration of deliveries to Turkey of Russian anti-aircraft missile systems s-400. On signing the Ankara agreement with Moscow on the purchase of these systems became known in the summer of 2017. The first deliveries are scheduled to begin in 2019-2020.

Answering questions of journalists, the Russian President noted that “it is surprising the speed with which it was promoted the anti-Russian campaign.” Putin recalled that the Director General of the laboratory in Porton Down, located 8 km from the place where the incident occurred, in an interview with Sky News that his team failed to set the country of origin of this nerve toxin. “They can’t identify the country of origin, including I can not say that this substance was produced in the Russian Federation”, – said the Russian leader.

He also said that on April 4 at the request of the Russian side will be held session of the Executive Committee of the International organization for the prohibition of chemical weapons (OPCW), which is planned to analyze in detail the situation around Skrobala. “I hope that this debate will set the final point that occurred”, – said Putin.