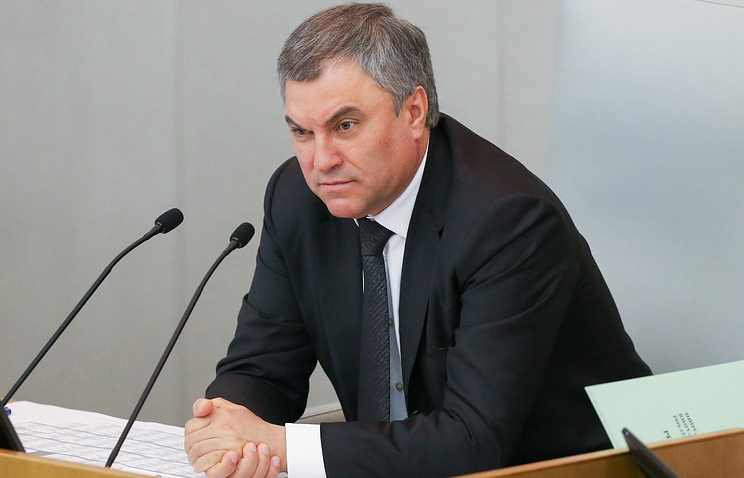 MOSCOW, April 3. /TASS/. Speaker of the state Duma Vyacheslav Volodin considers it necessary to remind politicians of Latvia about the coats, which, according to Latvian parliamentarians, “we can not let the Russian louse,” was always Russian.

Speaking on Tuesday at a plenary session during the discussion of the statement of the state Duma about inadmissibility of liquidation in Latvia of school education in the languages of national minorities, the Deputy from the Communist party faction Sergei Shargunov quoted Latvian politician, member of the Seimas Edwin Schnoor. “I quote: “If one day to let the Russian louse in the fur coat, to take it away will be difficult,” said Shargunov, thereby giving the example of relations with Russia and the Russian language in Latvia.

“We need to remind them that the coats they wore always Russian, so they need to think about what they are in these coats play the role,” responded Volodin.

The speaker also expressed the opinion that Russia should take in respect of Latvia “a more active stance in all directions” after the introduction of the Riga school education reform, virtually excluding training in the Russian language. “Let us in this direction will work and point, based on the fact that Latvia is a member of the Council of Europe and violates the fundamental rights of citizens, which indeed are protected under international agreements. In this regard, we need a more active attitude to adopt in all directions”, – said Volodin.

As stated in the discussion, the head of the Duma Committee on CIS Affairs, Eurasian integration and relations with compatriots Leonid Kalashnikov, it can be about personal measures against Latvian politicians responsible for the introduction of the school reforms and the introduction of a boycott against certain products and the prohibition of transit of Russian goods through the ports of Riga. “We want to recommend such measures, but the decision will be made by the President of the Russian Federation,” – said Kalashnikov.

Earlier, the Latvian Saeima adopted the law, according to which secondary education in senior classes in full, and in the middle classes largely to the 2021/22 school year will be provided in the Latvian language. Lessons in Russian is expected to remain for only a few subjects (Russian language, Russian literature) and for “items related to culture and history”.