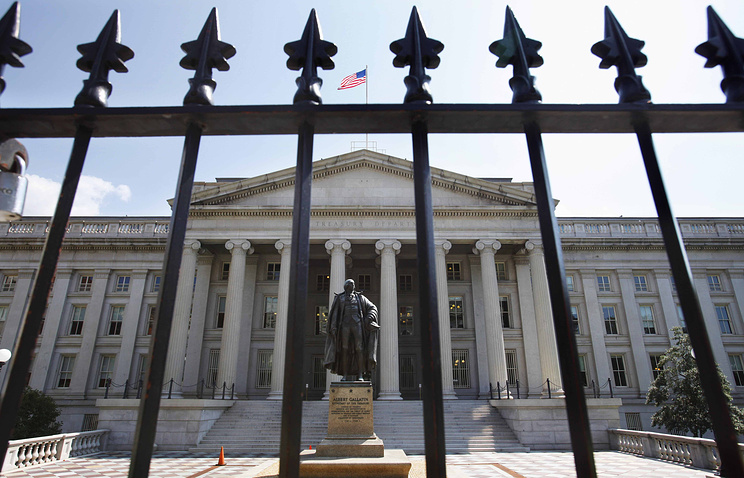 WASHINGTON, April 6. /TASS/. The us government has expanded its sanctions list regarding Russia, including 38 individuals and legal entities, including those holding Ministerial and equivalent posts, as well as large businesses. This was announced on Friday at a special briefing for journalists, three representatives of the US administration of high rank.

According to the reported version of events, Washington made this decision in connection with a number made in the last time steps on the world stage, who did not, according to the United States in the interests of international peace and security. In this case, as they argued, “the current solutions are not the answer to some single event or a single issue,” and represent the reaction to a set of steps of the Russian side, which us officials described as “malicious activity”.

One of the leading briefing said that Washington blames Moscow first and foremost the reunification of the Crimea with Russia. In addition, the representative of the US administration claimed that Russia is involved in “fomenting violence in the East of Ukraine”, supporting the Syrian President Bashar al-Assad “through the provision of [various] materials and weapons,” and engaged in illegal activities in cyberspace.

This time restriction was imposed on the seven entrepreneurs that were among the largest in Russia, 17 civil servants and managers of state corporations and against 12 private companies and two government agencies.

Second, the Americans made the Chairman of the Board of Gazprombank Andrei Akimov, Director of the Russian Institute of strategic studies, Mikhail Fradkov, member of the Board of Directors of “Gazprom oil” Sergei Fursenko, head of the presidential Directorate for socioeconomic cooperation with CIS States, Abkhazia and South Ossetia Oleg Govorun, the Governor of Tula region Alexey Dyumin, head of the interior Ministry of Russia Vladimir Kolokoltsev, Chairman of the Federation Council Committee on international Affairs Konstantin Kosachev, the head of VTB Bank Andrey Kostin, the Chairman of the Board “Gazprom” Alexey Miller, the Secretary of the Russian security Council Nikolai Patrushev, member of state Duma Committee on budget and taxes Vladislav Reznik, assistant of the President of Russia Yevgeniya Shkolova, Deputy Chairman, Bank of Russia Alexander Torshin, the Russian presidential envoy in the southern Federal district Vladimir Ustinov, head of the Main Department for combating extremism of the MIA of Russia Timur Valiulina, the head of Roskomnadzor Alexander Zharov, the head of Regardie Viktor Zolotov.

As explained by the American Ministry of Finance on the practices adopted by Washington decision means that the assets of all of 24 these people and 14 organizations, if any, are subject to U.S. jurisdiction, are subject to freezing. American citizens are prohibited to maintain any business relations with the defendants in the list. This provides a period of “orderly collapse” of business contacts of the Americans with included in black lists of individuals and legal persons.

The accusations against businessmen and the door for dialogue

A short written statement about the sanctions, the us administration had circulated on behalf of the Minister of Finance Steven Mnuchin. According to him, the Russian authorities act in the interests of the oligarchs and the ruling elite, which “will no longer be protected from the effects of the destabilizing activities of their government”.

In addition, as noted during a briefing the representative of the administration, a number of defendants in the United States is suspected in illegal activities.

However, the other leading the briefing, assured that the US is not going to close the door to dialogue with Russia despite new sanctions. “The current administration made it clear that the door for dialogue is open. We keep the channels of communication with Russia over Ukraine, Syria, arms control and many other bilateral issues”, – said the representative of the Executive branch of the United States.

The condition for the normalization of bilateral relations, he called the change of Russia’s “aggressive behavior.”

The Russian side has reacted to the extension of American sanctions list. So, Nikolai Patrushev noted that the sanctions – the case of the USA, and opportunities for communication still remain. “I’ve been in the US, been there many times. Given the fact that they imposed any sanctions, it does not mean that we are not going to communicate with them. There are other countries where you can communicate and solve these issues,” he said, noting that he learned about the inclusion of his name in list of journalists.

With regard to business, then, according to Patrushev, placed under sanctions, businessmen will be able to find ways to compensate for the threat, and this creates the potential for economic cooperation with other countries, except the United States.

The Minister of industry and trade of the Russian Federation Denis Manturov has promised that his office will strengthen the support of companies placed in the new sanctions list. In turn, Vice-speaker of the state Duma Pyotr Tolstoy called the new sanctions “an evil and disgraceful step to nowhere” and the method of influence on Russia, which “never fails”.

Responded to anti-Russian step of the U.S. and abroad. The official representative the Ministry of foreign Affairs of Turkey Hami Aksoy told the TASS correspondent that the new sanctions will not affect the agreement for the purchase by Ankara of the Russian anti-aircraft missile systems s-400.