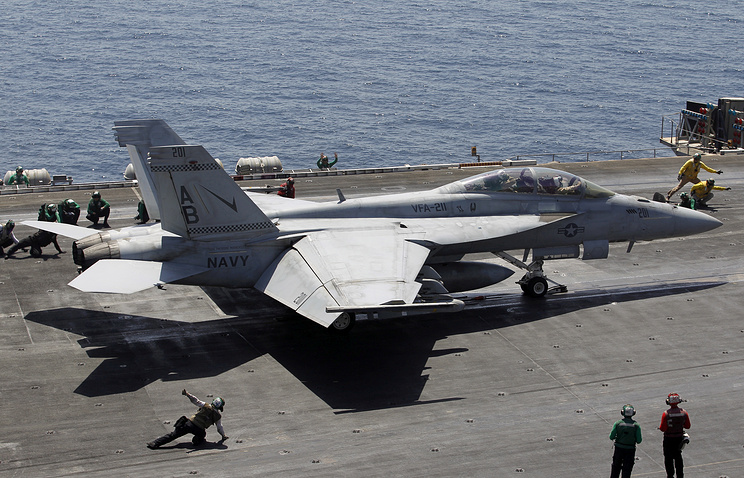 WASHINGTON, April 7. /TASS/. Production of carrier-based fighter-bombers F/A-18E/F Super Hornet will continue until 2025 and, possibly, their installation will continue after that. On this edition of Defense News said the head of the program at Boeing Dan Gillian.

“We are committed to maintaining our production rate of two machines per month until the end of 2025. And there are many opportunities to extend and even increase the pace,” he said. Previously, it was expected that the production F/A-18E/F could be completed by 2017.

Moreover, it is not just about the construction of a new fighter aircraft upgrade. In the first place, will be extended their life cycle – from 6 thousand to 9 thousand flight hours. We are talking about the package of modifications, referred to as Block 3.

Increase the efficiency of these multi-role fighters. They will be less visible to enemy radar, although about the full application of technology “stealth”. They will be equipped with fuel tanks with a streamlined shape, which again has a positive impact on aerodynamics. Moreover, they contain more fuel than in previous versions. All this is complemented by modern electronics, able to receive and transmit large amounts of data, and long-range sensors.

Competition with the F-35

Super Hornet is a fourth generation fighter, it is produced since 1995 in two versions. F/A-18E single and F are double. Its continued production came into question after the company Lockheed Martin has almost completed work on his multi-role fighter of the fifth generation F-35. But the project proved problematic. The matter of reliability of these aircraft, particularly after some incidents, including fires in the engine.

F/A-18 E/F in turn, proven and reliable machine. They are now involved in a number of operations, including in the fight against the terrorist group “Islamic state” (IG banned in Russia) in Iraq and Syria.