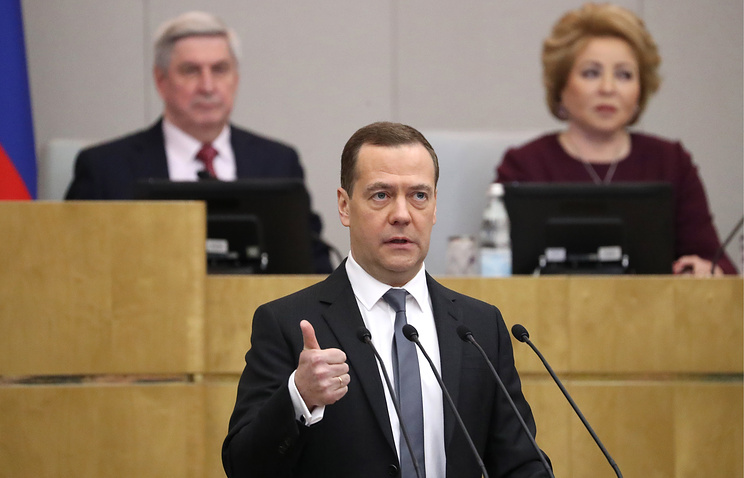 MOSCOW, April 11. /TASS/. Russia has learned to benefit from the current situation and to turn challenges into drivers of development. This opinion was expressed by Prime Minister Dmitry Medvedev, speaking with a report on the activities of the government in the State Duma.

“We have learned to turn challenges in the incentives of our development,” he said. According to the Prime Minister, the past six years were years of “opening yourself”, “open new opportunities”. “We realized we must become more self-sufficient. And industrial production is now increasingly says “Made in Russia”.

“And most importantly, well done!” – said the head of government.

Medvedev stressed that “Russia has managed to regain the status of the agricultural state, and now our bread is bought worldwide, as well as the Russian “soft” and IT that at Home provide the basis for the digital economy”. In addition, Russia continues to work on the development of the Arctic.

Medvedev summarized the main achievements of the country during the period. “We have defended your home from terrorists, stopping the transformation of the Middle East in global terrorist camp,” he said. The head of the Cabinet of Ministers have not paid attention to major international competitions, and noted the holding of the Summer Universiade and the FIFA Confederations Cup, Winter Olympics and Paralympics. “We are proud of these events and our athletes”, – said Medvedev.

In addition, Russia is the fastest in the world grew in the Doing Business rating. “Our guys just started to participate in competitions of professional skills WorldSkills in 2017, won first place in international Olympiads in many subjects leadership of our students has become traditional,” – said Medvedev.

The Prime Minister stressed that Russia has all the prerequisites to further advance in the Doing Business rating, despite the problems. He recalled that one of the key objectives 2012 -2017 years to the Cabinet was the formation of a more attractive business environment. In 2012, Russia, he said, occupied the 120th place in the ranking, and its immediate neighbors in the rating was Cape Verde and Costa Rica.

According to the head of the Cabinet, past years were “a period of great construction”. “We’ve never built so much housing, so many kindergartens and schools, – he stressed. In the cities are being renovated courtyards and parks.” According to Medvedev, virtually rebuilt took the Olympics the city of Sochi, set in order, accepting participants in the world Cup, was transformed Vladivostok and island Russian. Among the achievements of the last years, he also mentioned the completion of the first stage of the Vostochny space centre, experienced the flight of MS-21 aircraft, the construction of the Kerch bridge. “Is the modernization of the BAM and TRANS-Siberian Railways, construction of the Central ring road, – continued the Prime Minister. – Launch of the Western high-speed diameter in St. Petersburg, the Moscow Central ring. Across the country rekonstruiruet sea and air ports”.

Medvedev noted that the established six years ago, the Russian direct investment Fund and its co-investors have invested more than 1.2 trillion rubles in Russian companies, focusing, in particular, on projects in infrastructure and technology. Since 2012 together with the Agency for strategic initiatives were developed roadmaps, have been simplified or sped up many procedures that are important when starting and maintaining a new project, noted in his report to Medvedev.