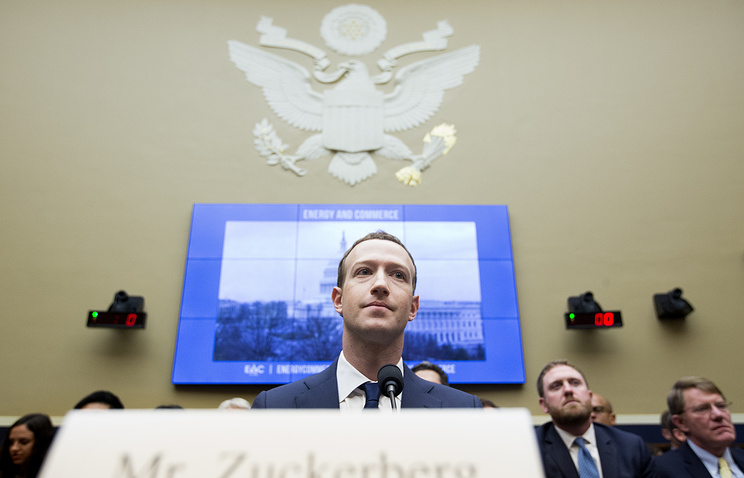 NEW YORK, April 12. /TASS/. The head of the American company Facebook, which owns the social network, mark Zuckerberg on Wednesday spoke at nearly five hours of hearings in the Committee of the house of representatives of the U.S. Congress energy and trade.

Legislators were interested in a wide range of topics, including those relating to the protection of personal data, the prospects for regulation on the Internet, a possible political bias Facebook, as well as the sale of drugs in the social network.

His speech to Congress Zuckerberg, as well as at a joint hearing of two Senate committees on Tuesday began with a prepared statement in which he apologized for not having done enough to prevent the use of social harm.

The members of the committees of the chamber, unlike colleagues in the Senate, asked more specialized technical issues, and often demanded that Zuckerberg not to give expanded explanation and to answer “Yes” or “no”.

I agree with the regulation

One of the main topics and the hearings in Senate committees, was the scandal of the British firm Cambridge Analytica. It is, as we learned earlier, collected information on about 87 million users of Facebook with the aim of developing algorithms for analyzing political preferences of voters. Zuckerberg confirmed that the employees of his company continue to notify people whose information was received by Cambridge Analytica.

“Yes, we have started to notify them this week,” he said. On the question, provided information about users to any other companies, Zuckerberg replied in the negative, but added that “now the company conducts the investigation.” “This means that we will investigate any possibility of access to large amounts of information,” he explained, noting that the proceeding may take “many months.”

Zuckerberg confirmed that Facebook is willing to submit some new rules in the field of protection of personal data of users, which may be imposed in light of the scandal. The entrepreneur stated that “inevitably will be some regulation.” However, he added: “it Should be approached with caution to ensure any standards set”.

Drugs in the social network

Several times Zuckerberg had to answer questions about what the administration of the social network is taking to prevent the sale of drugs. Republican Congressman from West Virginia David McKinley stressed that the management of Facebook repeatedly promised to stop trade with prohibited drugs among its users but was unable to do it.

Zuckerberg, replying, acknowledged the fact that the administration of social networks is not looking for self-declarations of this kind, but only responds to complaints of users. “Now, if people report these posts to us, we block them and carry out the inspection,” he said. The businessman admitted that it is a serious problem, however, stressed that even 20 thousand security professionals in the social network do not have the ability to review independently all information published.

A number of congressmen, particularly Republicans, have asked questions relating to allegations that Facebook was biased against conservative-leaning organizations, giving preference to the liberal-minded unions. Zuckerberg assured that the social network is trying to be “neutral platform”. He stressed that the administration of Facebook does not “absolutely no directives” regarding “bias against anything”.

The entrepreneur in this regard, acknowledged that the staff of Facebook made a mistake by blocking access to some videos that were published two political activists campaigning of U.S. President Donald trump. “In this particular case, our team made a mistake in regard to the application of the rules, we have already contacted them to fix it,” assured Zuckerberg.

On Tuesday on the background of the hearings, the company’s shares Facebook stock trades in the United States rose by 4.5% to $165,04. Zuckerberg to meet with legislators Wednesday, investors reacted more cautiously. Securities rose in price by only 0.78% to $166,32. In recent weeks, Facebook shares fell heavily amid the scandal around Cambridge Analytica.