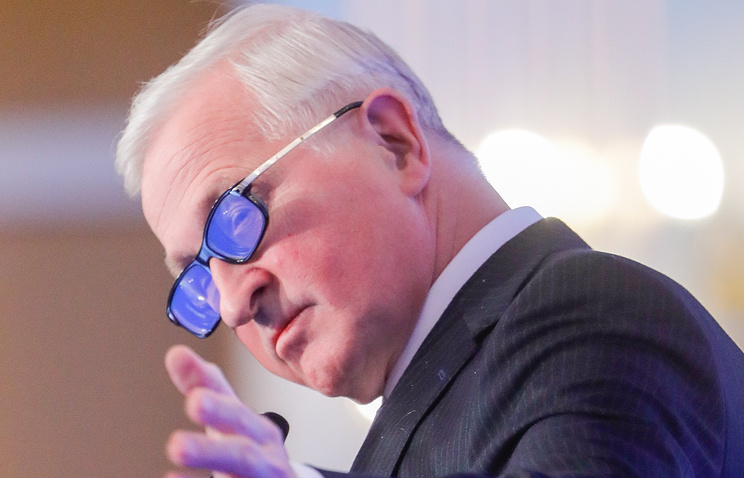 MOSCOW, April 20. /TASS/. Russian lawmakers discuss response to US sanctions, the legalization of parallel imports. This can be an effective measure, according to lawyers.

The question of legalization of parallel imports was discussed Friday at a meeting in the state Duma, said TASS, the head of the Russian Union of Industrialists and entrepreneurs (RSPP) Alexander Shokhin. President of “Business Russia” Alexey Repik confirmed the TASS work on this issue.

The removal of restrictions on parallel imports into Russia could expand the range of available Russians of goods and lower prices, experts say. “If Russia were to allow parallel imports of any product, local retailers will be able to seek better deals from suppliers around the world and prices for the consumer should be reduced,” – said General Director of “Mittelstand Consulting” Sergey Melkumov.

USA 6 APR imposed against Russia new sanctions, bringing down the stock and currency markets. Russia has promised a harsh response and has prepared his bill. He, in particular, involves the restriction of imports in the Russian Federation agricultural products, raw materials, food, alcohol, tobacco and medicines, as well as a ban companies with share of foreign capital exceeding 25% to participate in privatization and to assist government agencies, consulting and auditing services.

Among the retaliatory measures of the Russian law – “the exhaustion of exclusive rights to trademarks in relation to goods in the list determined by the government of the Russian Federation, the holders of which are citizens of the United States of America and (or) other foreign States”. In fact, this wording means allowing parallel imports from the US, but with some reservations, analysts say.

The essence of the perceived constraints

Usually under a parallel import refers to the import of goods into the country without proper agreement with the holder of the trademark. That is, the importer is not the official supplier, distributor, but the product itself is not fake, but original, just not agreed to the sale on the territory of a particular country.

According to managing partner of advocates Bureau “Filipkov and partners” Vadim Filipkova, the exhaustion of exclusive trademark rights, under the bill, could mean an official permit parallel imports those goods which will be determined by the government of the Russian Federation in the corresponding list.

Of the provisions of the Civil code it follows that nobody can use protected in the Russian Federation trademark without permission.

“The only exception to this rule is the principle of exhaustion of exclusive rights, which means that the rightholder cannot prevent the use of the mark in relation to the same goods which have been put into circulation by him or with his consent, i.e., he cannot exercise his right twice in respect of the same goods supplied to the Russian market”, – says the lawyer from AB “Business fairway” Kristina Mayorova.

However, the bill on retaliatory sanctions is “mysterious and not very clear” wording, said the Director of the Institute for law and development “, HSE – SKOLKOVO” Alexey Ivanov. “If they wanted to legalize parallel imports, then perhaps it’s just unfortunate wording. Needed to write appropriate changes to the RF civil code in the context of exhaustion of exclusive rights”, – says the expert.

According to him, the essence of this formulation is in an isolated permit parallel imports only with regard to a list of trademarks that belong to American companies. And it is not legally covers the geographical factor, which traditionally linked the use of the term “exhaustion of the exclusive rights”.

“If I was given the task – write to parallel imports of American goods were allowed, then I would write: the exhaustion of exclusive rights in such goods takes place, irrespective of the entry of the goods into circulation on the territory of the Russian Federation at introduction of the goods into circulation in the territory of any country in the world. In the present formulation, geographical point, he’s lost,” he said.

The principle of exhaustion of exclusive rights

Since 2002 in Russia the national principle of exhaustion of rights. This means to import goods is possible only with the permission of the trademark owner. In 2012 FAS initiated on transition to the international principle of exhaustion of rights to intellectual property that would permit parallel imports. Although the issue has become a subject of discussion on platforms of different levels, it is still not solved.

“It is expected that such exceptions will be applied taking into account the interests of all countries of the Union in situations if a particular product is not available in the domestic market of the Union, either not enough or the prices are too high and in other cases on the basis of socio-economic interests of the member States of the EEU”, – TASS said a source familiar with the decision. However, according to him, at this stage we can talk about fixing an agreed position of member States of the EAEC, as the most rational to find a solution to the problem of parallel imports. “A further question – how soon within the EAEU countries will be agreement about the introduction of exceptions to the regional principle of exhaustion of rights,” the source added.

The pros and cons

The current proposal for the authorization of parallel imports of certain U.S. goods has a practical drawback, the Director of the Institute for law and development “, HSE – SKOLKOVO” Ivanov said. To determine who owns the trademark, will, in his opinion, very difficult. “These companies very much, and there are some small brands that do not understand who they belong to. And where do I find this information? It may be somewhere there, but it’s how much effort you need to spend. And then there is the risk that the importer will carry out the import into Russia of goods not the copyright holder – not American, or not sufficiently American and the importer will stop at customs, and he gets severe penalties for parallel importers. They mean up to confiscation and administrative fines. I don’t know how it would work from the standpoint of purely practical,” says Ivanov.

Partial permission for parallel imports – for example, only from one country or region will be difficult to administer, and most likely, it will create additional barriers to participants of foreign trade activities, the Director of “Mittelstand Consulting” Melkumov. “To determine the status of intellectual property at the border may be long, and to organize a preliminary proof – expensive for the importer. There is also the risk of growth of corruption component,” – he said.

On Friday, the head of RSPP Shokhin noted the discussion of “anticyclonic law” in the state Duma of the Russian Federation stated that the business is not configured for the formation of a new “iron curtain”.

“For us, for business it is very important to maintain a balance. A balance between the protection of national economic interests, geopolitical interests of Russia and interests of economic development. Many foreign companies actively working in Russia, investing in Russia’s economy, provide goods and services to which the Russian economy needs, and we certainly do not intend to contribute, including through the law, a certain isolation of Russia, the development of a new “iron curtain”, – he told reporters.

More tangible to the American side, there would be other sanctions, says Ivanov. Russia could impose restrictions, which severely affected the interest of American companies, but will be formalized in the framework of international treaties in the framework of the valid national regulation.

“Moreover, these measures can not just hurt US, they will still provide substantial assistance to Russian companies to reach a new level. It would be good to our legislator on such measures thought,” he said.

According to Ivanov, it is necessary to legalise parallel imports, or in other words, go to the international principle of exhaustion with current national principle. “It is very important not only for consumers who will have access to goods of higher quality products, greater choice and lower prices for many items, medicines. We 2-3 times overpay for medicines, medicines, and so on. And this thing at the time was lobbied by American companies here in Russia”, – says Ivanov.

He also offers to withdraw from criminal and administrative liability in Russia for violating the rights of intellectual property belonging to American companies. “We would leave them to civil liability, and all penalty liability – it would remove. Would say why the Russian government has to mess with you? After all, it’s civil relations, so solve them yourself. This would be TRIPS (Agreement on trade-related aspects of intellectual property – approx. ed.), that is, agreement within the WTO framework, this would correspond to all the conventions,” – said Ivanov.

The rejection of this responsibility will hurt the interests of U.S. companies and released a significant portion of time and resources for Russian customs and law enforcement agencies, he said.

Moreover, TRIPS and other conventions provide a number of exceptions that can use the national legislators, the expert adds. “For example, most conventions allow for the use of someone else’s intellectual property without consent of the owner, if necessary, the development of national health, education or development of competition,” he says.

South Africa during the HIV epidemic in the 1990-ies have used the right to issue so-called compulsory licenses, which are provided by the TRIPS agreement. Such licenses allow you to use someone else’s object of intellectual property rights without the consent of the copyright holder with the payment of reasonable compensation, but the compensation is significantly below market, says Ivanov. “You completely play most modern drugs, but pay a reasonable price. In India these stories have built the pharmaceutical industry in fact, and South Africa has solved the problem of the epidemic. Russia is one of the few countries that pays the full amount,” – said the Director of the Institute for law and development “, HSE – SKOLKOVO”.