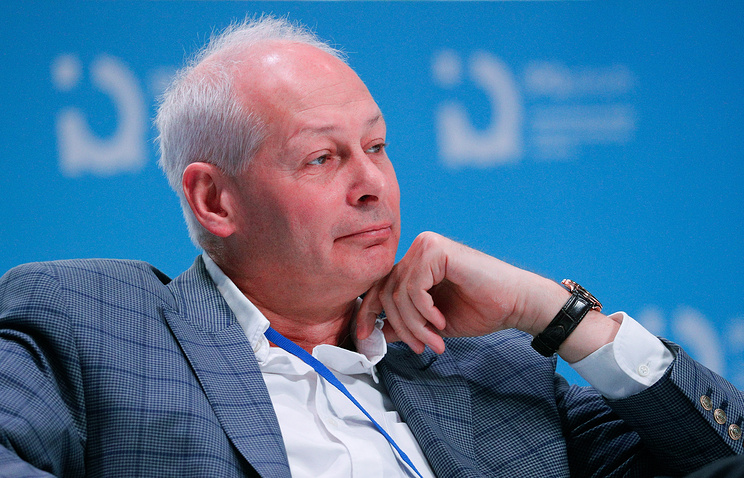 SHANGHAI, April 26. /TASS/. Development of channels and platforms of information dissemination can become one of directions of cooperation of Russia and China. This was stated on Thursday by Deputy Minister of communications and mass communications of the Russian Federation Alexey Volin, speaking at the ongoing Shanghai the Russian-Chinese conference “Russia and China: modern challenges for development” organized by the International discussion club “Valdai” in conjunction with East China normal University.

“Another area of cooperation, from our point of view, is the development and use of modern platforms and distribution channels. Today, especially if we are talking about how to distribute content to a global audience, it is often we and our Chinese partners and colleagues are using traditional social networks such as YouTube, Telegram, Facebook, Twitter,” – said the Deputy Minister, noting that, if we talk about Facebook and Twitter, the Russian media have already encountered on these platforms with some kind of restrictions.

“You have to understand that if we at some point will not develop their own independent distribution channels, we’re in a very vulnerable state. Large serious player should have its own technological platform content distribution, and it can become a serious direction of our cooperation and our joint activities,” – said Alexey Volin.

In an interview with reporters on the sidelines of the conference Alexey Volin stressed that the products of the media is competitive when the following two conditions: professionalism in the preparation of materials and rapid delivery of the information product to the consumer. “We see that the number of delivery methods and means of communication with the consumer every day becomes more and more. If we fail to use all available channels of communication, we at some point may find themselves in a situation where the product is produced, and its delivery is not made. Therefore, in Russia and in China are creating their own communication platforms”, – said the Deputy Minister, adding that this does not mean the cessation of use of available, including strangers, a means of communication.

“But we understand that on other platforms, we can be vulnerable, so we need, first, to develop its own platform, and secondly, in particular, and collaborative platform,” said Alexey Volin.

Cooperation of Russia and China

“We pay great attention to further development of relations with China in the field of media”, – the Deputy Minister said, Recalling that recently held cross year media of Russia and China. According to him, currently, both sides expressed the need to maintain the high level of relations which was reached in the course of these events, and also to promote this cooperation further.

“Particularly we consider important the cooperation of regional media. This is the year of cooperation between the regions of our two countries. We have in the next two months we will hold several major events,” – said Alexey Volin. According to him, in particular, discussed the participation of Chinese media in the media forum and the TRANS-Baikal far Eastern media summit. “We expect a large delegation of Chinese media will arrive in Chita and Vladivostok in late may and early June,” he said.

During the recently held working meetings in Beijing, said the Deputy Minister discussed future cooperation in the field of cinema, joint projects on creating both documentary and feature films. Was discussed, he said, and the possibility of creating a large joint project on the war with Japan, based on discovery in Russia of the Soviet documentary.

In the Russian media, said Alexei Volin, in different areas formed a very positive image of China, and estimates are mostly friendly in nature.

Restrictions to the media

He also noted that some Russian state-owned media face several restrictions when working in the foreign Western markets, and this approach can be implemented against any other influential source of alternative opinions.

“In Russia we see today that a number of state-owned Russian media was refused any Western platforms, or they are trying to create serious limitations in their activities in foreign Western markets”, – said the Deputy Minister.

At the same time, he noted, if we compare the attitude to the Russian and Chinese media in the West, to the Chinese media this kind of discrimination yet. “But we are well aware that step is the hardest and if it was done in relation to our media, it is a General approach that can be implemented in respect of any influential independent source of alternative views”, – said Alexey Volin.

In an interview with reporters on the sidelines of the conference, Wolin indicated observed in several Western countries outright discriminatory measures against the Russian media. “There is a potential threat and in relation to the Chinese, because, clearly, what we are talking about the fight from a different point of view, which enjoys a certain popularity or influence. In fact, it is unscrupulous competition,” – said the Deputy Minister.

“We are developing methods of dealing with this unscrupulous competition, I think that our Chinese colleagues and partners is also thinking in this regard”, – said Wolin, adding that on this subject with the Chinese side, there is an exchange of views.

The Influence Of The West

The Western influence on the Russian mass media and society leaving, said Wolin

“Traditionally it is considered that many of the media in Russia and in China are highly influenced by their Western counterparts. Today we in Russia are witnessing the process, when the Western influence on the media, in principle, as Russian society itself, go away,” – said the Deputy Minister. The reason he called a “clumsy policy” pursued by the West against Russia in General and in relation to Russian media.

According to him, currently the Russian media, witness how the principles which have for many years proclaimed, was written in all textbooks the basics of journalism, in fact, violated by the same founders in the Western States. “This applies to pluralism, this also applies to the second point of view, this also applies to censorship, because largely we see a very serious intolerance as to another and different position, and direct limitation of the activity of competing media,” said Alexey Volin.

The conference participants and agenda

This conference, which is organized by the International discussion club “Valdai” in conjunction with East China normal University, held in Shanghai for the fourth time. One of its main objectives – discuss at expert level the most important issues related to creating reliable base for further development of bilateral relations, and also support the efforts of politicians and diplomats in this process on the part of elites and society. The main questions for discussion are indicated in particular such topics as the evolution of U.S. policy, the nuclear programme of the DPRK, the dynamics of internal change in Europe, challenges to international security in General and security in Asia in particular.

Attending the two-day discussions this year are taking more than 50 officials and representatives of scientific and expert community of Russia and China.