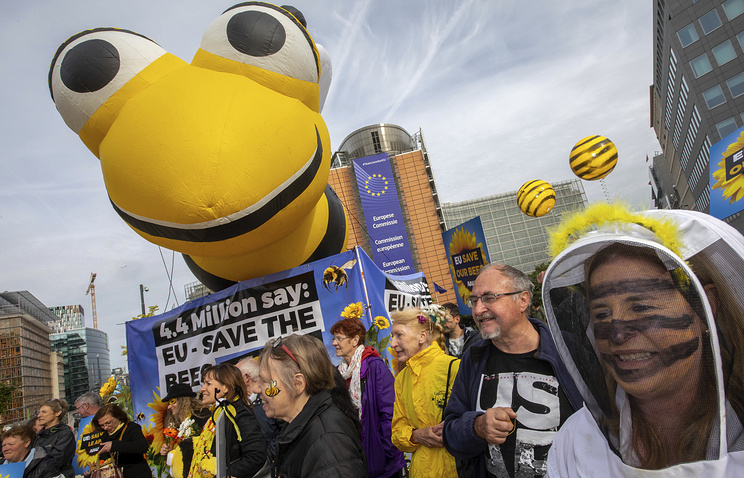 LONDON, April 28. /TASS/. One of the most used in the world of pesticides will be prohibited for use in the fields, as they threaten the health of wild and honey bees. It is expected that the ban will come into force by the end of 2018, reported the Guardian.

The ban on neonicotinoids (a class of insecticide that is most commonly used in agriculture) was approved by member countries of the European Union on Friday, and from now on they will be allowed only in enclosed greenhouses.

“The Commission has proposed to adopt similar measures a few months ago, on the recommendation of management, the newspaper quoted the words of Vitanica of Andriukaitis, the European Commissioner for health and food security – This issue is of paramount importance, because the situation threatens biodiversity, food production and the environment.”

However, the manufacturers of pesticides and some farmers believe that such a ban may reduce the yield of crops. “European agriculture will suffer as a result of this decision, – quotes the edition position Graham Taylor from the European crop protection Association. – It may not happen today or tomorrow, but over time, those who made this decision, you will see that deprived farmers of a vital tool.”

In 2013, the EU banned the use of neonicotinoid for the treatment of flowering crops that are pollinated by bees, for example, rape. However, in February this year, experts on risk assessment from the European Agency for food safety published a report which stated that any use of neonicotinoids harm honey and wild bees, as these insecticides contaminate the water and soil. Laboratory studies of honey also showed that it contained the same class of pesticides.

Bees pollinate three quarters of all crops, and a sharp decline in the number of individuals in recent years, according to the scientists, partly due to the use of pesticides. Neonicotinoid – toxic substances nervously-paralytic effects that are dangerous for bees and many other insects. They desorientiert bees and honey reduce the performance of individuals in large amounts causing paralysis and death.