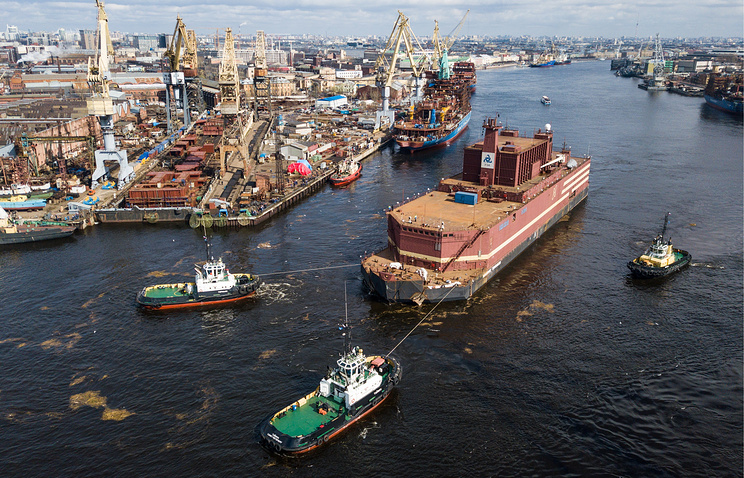 SAINT PETERSBURG, April 28. /TASS/. Towing power unit (FPU) for floating nuclear power station “Academician Lomonosov” from St. Petersburg, where it was built at the Baltic shipyard in Murmansk for charging nuclear fuel began on Saturday morning. The tugs began their work about nine o’clock in the morning, the correspondent of TASS.

“Today, we can say, a historical event, today completed the construction of the floating power unit at the Baltic shipyard and today starts towing to Murmansk to base “Atomflot”, where it is planned to hold the mooring tests, fuel loading and the physical and power start-up. In fact, the unit will be fully tested”, – said Deputy Director General of concern “Rosenergoatom”, head of the project for the construction and operation of floating nuclear power station Pavel Ipatov.

PEBA towing to Murmansk would take 18 to 20 days. The unit will pass Estonia, Finland, Sweden, Denmark, Norway. “In order to tow the ship to Murmansk, it was necessary to get the full range of permissions, primarily the readiness for shipment as such, because in fact it was his first voyage after it was built. Therefore performed convertive, preparing for the motion of the ship, completed all the formalities with customs and border services, received permission from the insurers,” – said Ipatov.

To the Chukchi Pevek city, the ship will sail in 2019 in the summer: in June and July, when conditions for towing will be most favorable.
PEB project 20870 designed for operation in the floating nuclear power plant (FNPP). The station is equipped with reactor plants KLT-40C, capable of producing up to 70 MW of electricity and 50 Gcal/h of heat. This is enough to provide the city with a population of over 200 thousand people.

Teh “Akademik Lomonosov” is being built for the station in the town of Pevek. The unit will provide electricity to the port city, gas and oil platforms in the open sea. It can also be used as a desalination plant and can produce up to 240 thousand cubic meters of water daily, the service life of the unit – 35-40 years.

Baltiysky Zavod – Petersburg shipbuilding enterprise, a member of the United shipbuilding Corporation. It specializiruetsya on the construction of nuclear icebreakers and floating nuclear power plants.