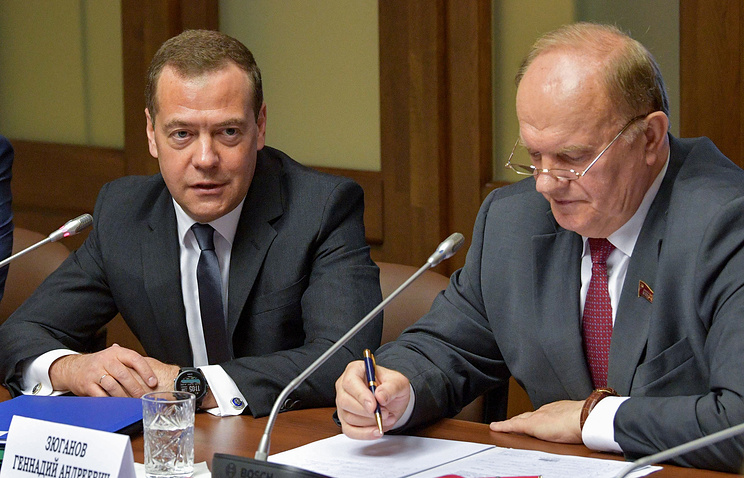 MOSCOW, may 8. /TASS/. The candidate for Prime Minister Dmitry Medvedev at a meeting with the Communist faction in the state Duma disagreed with the Communists on the cost of implementation signed on Monday by Russian President Vladimir Putin’s decree “On the national goals and strategic objectives development of the Russian Federation for the period up to 2024”. On Tuesday told TASS first Deputy Chairman of the Duma Committee on economic policy, industry, innovative development and entrepreneurship Nicholas Arefiev (CPRF).

As the MP noted, Medvedev told the Communists that the implementation of the presidential decree will need 8 trillion rubles. “But [the Communist party leader Gennady] Zyuganov corrected him and said it would take 10 trillion rubles,” – said Arefiev.

Vladimir Putin, came on Monday in the office of the President of Russia signed a decree “On the national goals and strategic objectives development of the Russian Federation for the period up to 2024”. In the document the government of the Russian Federation delivered a few tasks, the main of which is the increasing life expectancy and quality of life of Russians, increasing their incomes, reducing two times the poverty level, improve living conditions for at least 5 million families annually, the entry of the Russian Federation among the five largest economies in the world, providing economic growth above the world while maintaining macroeconomic stability, including inflation at the level not exceeding 4%.

Also the Cabinet of Ministers needs to ensure that “the acceleration of technological development of the Russian Federation, increasing the number of organizations implementing technological innovations up to 50% of their total number, and also ensuring the accelerated implementation of digital technologies in the economy and the social sphere and the creation in basic industries, high-performance, export-oriented sector, developing on the basis of modern technologies and staffed with highly qualified personnel.”