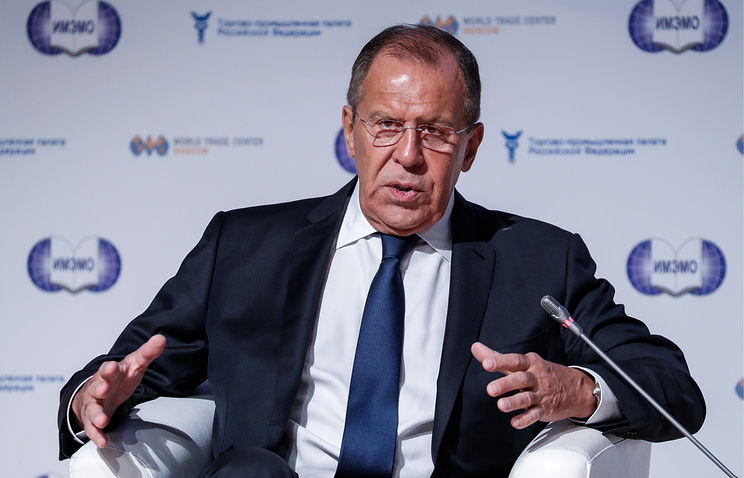 MOSCOW, may 30. /TASS/. The instability of the contemporary world order, the situation on the Korean Peninsula, Syria and Ukraine were the main topics of the speech of the Minister of foreign Affairs of the Russian Federation Sergey Lavrov on the second day, “Primako readings”, held at the world trade Center in Moscow.

During a press conference on Wednesday, Lavrov denounced Kiev for Russophobic charges following the murder of the journalist Arkady Babchenko, and noted that the application of the Dutch side about the Russian involvement in the Malaysian Boeing crash was deliberately done now, before the start of the football world Cup. The Minister also expressed readiness to expand diplomatic consultation with the United States.

Excessive use of force in world politics

The Minister of foreign Affairs expressed concern due to the fact that the participants of the world politics increasingly began to resort to unjustified use of force “to achieve short-term opportunistic interests by openly fictional, ridiculous pretexts.” According to the Minister, the widespread practice of unilateral decision-making undermines the collective agreement, resulting in “increased risk of uncontrolled escalation.”

However, he pointed out that failure to resolve the crises through ultimatums and threats. “I mean the US withdrawal from the Joint comprehensive plan of action on Iran’s nuclear program based on the organization’s all-out confrontation with Iran, and many staged situations with the alleged use of chemical weapons by the Syrian government aimed at regime change in Damascus”, – the Minister added.

To understand the DPRK

In his speech, Lavrov referred to his forthcoming trip to North Korea may 31. “The purpose of this visit like any other visit, is to consider bilateral relations with our partners and to discuss the situation in the appropriate region of the world, – said Lavrov. For me it will be very useful to understand the attitude of our North Korean neighbors to all matters [of resolving the situation on the Korean Peninsula]”.

The Russian foreign Minister added that solving the problem of denuclearization of the Korean Peninsula must be produced in the existing format of the “six” (Russia, China, DPRK, Republic of Korea, USA and Japan). Ultimately, the Minister should be “peace and stability throughout northeast Asia”.

The murder of a journalist in Kiev

Lavrov also commented on the versions of murder of the journalist Babchenko, which occurred in Kiev on Tuesday. The Minister called the incident a tragedy and added that the above-mentioned accusations of the Prime Minister of Ukraine Vladimir Groisman to the Russian special services was proposed in order “to promote Russophobic attitudes.”

“This fashion, which ask authors of this kind of international public Affairs, very sad, but as you can see, many of her picks, especially those who, like our Ukrainian neighbours, to enjoy complete impunity by its Western curators and ignore their advice on how to restore order at home, because I know that Ukraine needs Western curators in order to promote Russophobic attitudes and try to create uncomfortable for our country’s situation,” he added.

According to the Minister, such a policy of “useless and meaningless”.

Willingness to compromise to resolve the crisis in Ukraine

Commenting on the situation in Ukraine, the foreign Minister noted that Russia is ready to compromise for the sake of resolving the crisis situation. “Having said that in Ukraine there was not a coup, and democracy has prevailed, it is difficult now to eat my hat. Lavrov said about the reaction of the German and French politicians on the situation in Ukraine. But we are still ready to compromise.”

The Russian foreign Minister also stressed that the holding of the meeting in the Normandy format, which I propose to organize the foreign Ministers of Germany and France, only makes sense if there is a “dilution of forces and means under the Village of the Luhansk and fixing on paper “formula Steinmeier”.

At the end of communication with the forum participants from one of them was a question about foreign troops on the borders of Syria. The Minister reiterated that in 2017 was achieved by international agreement, involving the withdrawal of foreign troops from the South, deescalate on the border with Israel.

“I think that this should happen as soon as possible. Now we this including do with our Jordanian and American colleagues,” he added.

Accusations of Russia in the crash of Boeing MH17

Not without one of the most discussed in recent days that collapse of the Malaysian Boeing MH17 over Ukraine in 2014. Lavrov said that Dutch diplomats “on the ground of absence of any facts” accused Moscow in the crash and is doing this in anticipation of the 2018 world Cup. “I think they decided to make it public in the context of their own thinking about the upcoming major international events, – said the Russian foreign Minister. – They have a desire to spoil the mood, but these attempts are futile”.

The dialogue with the United States should expand

During conversation with participants of the forum, the Minister said that Russia is ready for a more active diplomatic contacts with the United States. “We are open to this on a number of fronts, not too wide range, but nevertheless, currently a number of areas have contacts and we are for that they expanded,” – said Lavrov.

The head of the Russian foreign Ministry noted the unpredictability of the American President and stressed that many foreign policy decisions of Donald trump is dictated by internal reasons. “The enormous share of foreign policy decisions in Washington are taken with an eye on the political situation, and the closer the elections, the more it will manifest, he continued. – Maybe it would be better to have a more predictable views of American foreign policy, but the reality is the reality.”