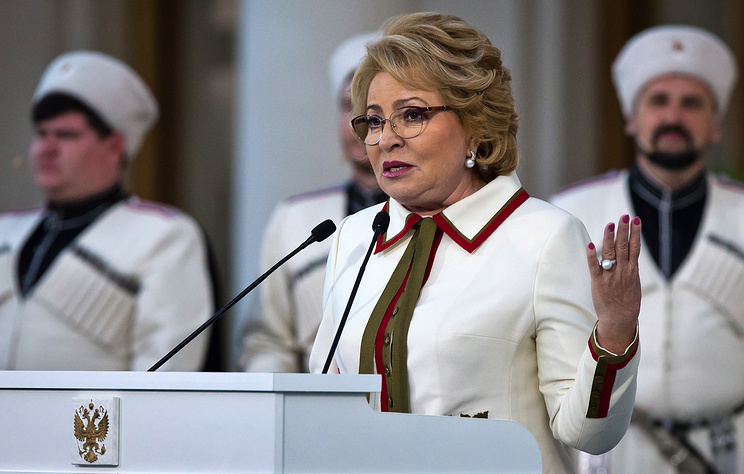 YALTA, June 6. /TASS/. The Chairman of the Federation Council Valentina Matvienko considers that the actions of Moldova to deprive the Russian language of the status of language of interethnic communication in violation of international law. The Ministry of foreign Affairs of the Russian Federation and the Federation Council intend to apply to the authorities of Moldova with the “please think again”, she said to journalists after the forum in Yalta.

“We are from our international Livadia forum will send a statement with the sharp protest against such actions. This action not only against the Republic of Moldova, they violate international law and violate numerous international resolutions in the field of language policy. We have every reason to contact, and urge them to think again. Of course, the Federation Council plans to make such a statement and the Ministry of foreign Affairs,” she said.

She added that “Moldova is a multiethnic state, there live also Russians, Ukrainians, Bulgarians, Gagauz – according to conservative estimates, more than 30% of citizens of Moldova speak Russian language as the language of interethnic communication.”

“It’s politicking, it attempts to join the ranks of Russophobes? Not realizing the consequences of what they are doing. It is against the long-term interests of the state of Moldova, this temporary worker-policy, which are thus curry favor in front of someone, earn capital and created the conditions for this kind of solution. Of course, in Moldova there are sane forces and politicians, already a strong protest was made by the President of Moldova, condemning this decision. Of course, we also can not react”, – said the speaker of the Federation Council on the results of the plenary session of the International forum of Livadia in Yalta dedicated to the celebration of Russian language Day.

June 4, the constitutional court of Moldova has cancelled the law that established the Russian language the status of language of interethnic communication in the country. Earlier, Matviyenko said that outraged by this decision. According to the parliamentarian, the Russian authorities should react to it.

International festival of Russian, Slavic culture “the Great Russian word” held in Crimea annually since 2007. The festival is held under the auspices of the State Council of the Republic of Crimea and the Council of Ministers of Crimea. The forum is aimed to support Russian culture, strengthening positions of the Russian language, the development of international cooperation in the humanitarian sphere.