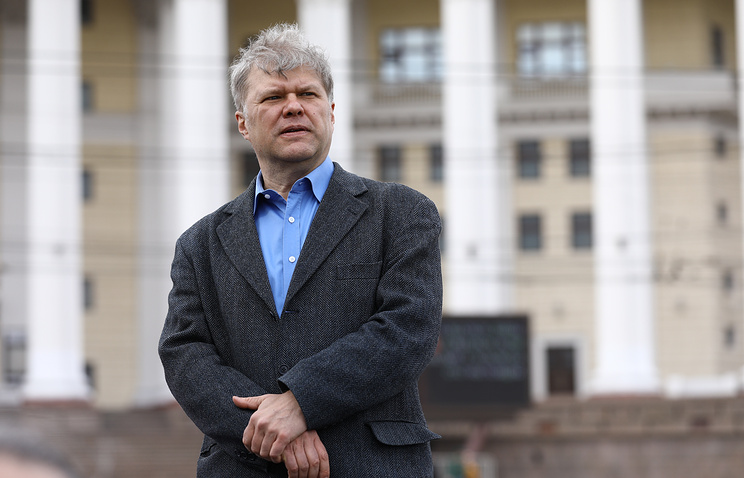 MOSCOW, June 5. /TASS/. Chairman of the Moscow regional branch of the “Yabloko” Sergei Mitrokhin, who took second place in early voting (primaries) party by definition of the candidate in mayors of Moscow, intends to run for the position. This he told TASS.

Previously, the winner of the primaries, head of the municipal district “Tver” Jacob Yakubovich refused to participate in the September elections of the mayor in favour of Mitrokhin. His decision Yakubovich explained the reluctance to the voices of municipal deputies from the “United Russia” to overcome the so-called municipal filter. Now required for registration of the candidate in mayors of a number of local deputies in Moscow has only the party “United Russia”.

“I intend to run for mayor. I believe that Jakubowicz did decently. He saw the attack on me was during the primaries on the principle of “anyone, just not Mitrokhin,” and showed itself independent person did not want to be a pawn in someone else’s game,” said Mitrokhin, commenting on the decision of his opponent. Mitrokhin believes that Yakubovich also listened to the opinion of the founder of the “Yabloko” Grigory Yavlinsky, who supported his candidacy in the primaries.

Mitrokhin said he intends to work with Yakubovich. “If I was elected mayor he was the first in the list in the Federation Council. Or, if he chooses, can become Vice – mayor” – promised the head of the Moscow Yabloko.

The need for assistance from the “United Russia” to register as a mayoral candidate Mitrokhin do not mind. “Municipal filter” not invented by us, he invented it so that we looked humiliating, but in 2013 the mayoral election Alexei Navalny, who received votes of municipal deputies from the “United Russia”, such claims are not filed, and I then also received their vote to register,” – said Mitrokhin.

The decision on nomination of the candidate in mayors of Moscow from the “Apple” has to take the party Bureau and the conference of the regional Department. It was assumed that they will be the winner of the primaries, which ended on 4 June. Deputy Chairman of Yabloko Nikolai Rybakov said that the party leadership will discuss the situation resulting from the failure Jakubowicz from the nomination for mayor of Moscow, but the date and time of the meeting of the Bureau of the party found it difficult to clarify.