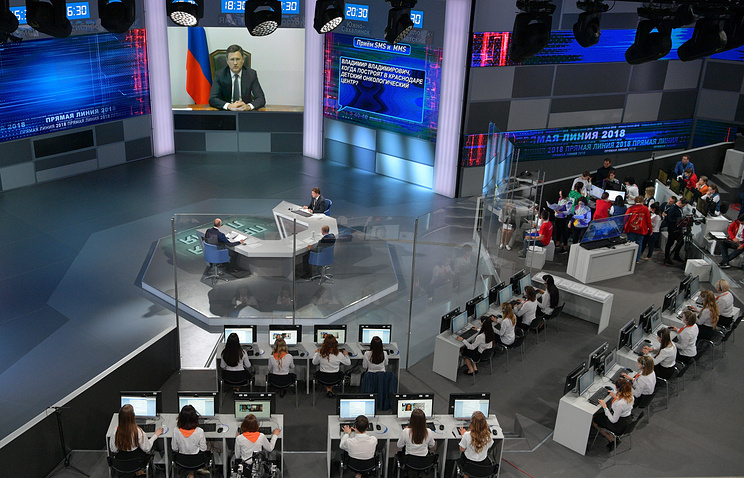 Vladimir Putin during a “Straight line” has answered questions of citizens of Russia and other countries. Putin communicates with the citizens in this format for the 16th time since 2001 and for the first time after his reelection in March 2018. The current “Direct line” had its own characteristics: in touch with the Studio in Moscow, there were Ministers of government and heads of regions, who live and answered questions on their competence. In fact, it reduced the response time to the citizens. What decisions are already being made on the basis of “Straight line” at the TASS.

A resident of St. Petersburg Alexey Karavaev asked a question about gasoline: how long will increase prices. “How can you stand it? Stop somehow this,” he said.

“This is unacceptable, wrong,” — said Vladimir Putin. He called this situation by the mismanagement in the energy sector, which led to the stimulation of export of crude oil abroad. And the oil companies, directing raw materials to oil refineries, consider the lost profit and increase the price of fuel to compensate.

The President spoke about reducing the excise tax on fuel, which should stabilize prices in the domestic market. In addition, it was cancelled a decision on another increase in excise taxes.

Putin gave the floor to the Minister of energy. Alexander Novak said that fuel prices have increased above inflation — 5.6%, but at the end of the month they managed to stop.

Deputy Prime Minister Dmitry Kozak also participated in the air and said that the government and the oil industry agreed to daily monitoring of prices at filling stations. He also said that the government will submit to the Duma a bill to raise the export duties on motor fuel if the oil companies will keep prices reasonable. Putin, for his part, promised to support this bill.

Plot for family with three children

The mother of three children Natalia Zhurova from Tomsk told the President that as a mother with three children standing in line to receive land since 2010. Then it was 735 and to this day is defended only half the queue. “I’m 42 years old, and 10 years I have downtime. And I want to teach children to land, to labour,” she said. According to Natalia, in the Tomsk region the right to obtain land in preferential order have only a family with four children, and she’s standing in the General queue.

Putin replied that for him “this strange formulation of the question to obtain, you need to have four children.” To raise three kids too hard, and we need to encourage these families, he said. Another thing is that the allocated land should be suitable for construction and provided with the necessary infrastructure.

Tomsk region Governor Sergei Zhvachkin said on the air “Straight line”: “Have a lot of land, but we can’t give away land without communications.” The head of the region promised to meet with Natalia Zhurova and report the results to the President.

Old hospital of a small town

Residents of Strunino of Vladimir region has told the President that in their hospital closed the children’s Department and they children have to go to the neighboring city of Alexandria.

“Hard work to get there, and then to stand in a queue, said Anna Pogodina, the mother of ten children and eight grandchildren. No treatment is avail. You have to sign up for a month and a half and wait for a bed very long time.”

President addressed his question to the head of the Vladimir region Svetlana Orlova. “Today we have nothing close to Strunino, she said. — We have allocated 68 million rubles. 20 million — to repair the children’s clinic, 40 million roubles on the hospital and the repair of the skin and dermatological offices”. According to her, hospital — 1929 buildings, and in the children’s Department was now dangerous to drive children. Orlov said that while the clinic of Strunino was transferred to Alexandrov, but it is temporary.

“Clearly, this medical institution has to function as modern and to really help people, — said Vladimir Putin. — What is there to keep the extent of which need to be addressed at the regional level with the Governor, with the municipal authorities. With the support of the Ministry of health Skvortsova hear it. I assume that it will all be fulfilled, and I want to draw the attention of my colleagues: I ask you personally to look at it, to avoid such discrepancies in the future.”

Later, the head of Ministry of health of Russia Veronika Skvortsova has instructed the health Ministry to verify the claims of the inhabitants of Strunino.

According to her, after the floods, the Commission issued a certificate that the accommodation is unsuitable and emergency. The family was given the certificate, but then withdrew from the lists of certificates, “as we since 2002, are nonresidential. I designed the house in property in 2014, no one told me that the house is uninhabited Fund”.

“We tinkered, and I will wait for the report of the Governor”, — Putin promised.

The head of the Stavropol territory Vladimir Vladimirov was aware of the situation, he said that the intervention of the President to resolve disagreements between agencies on this issue.

“There are 17 such families, he said. Documents returned to us on the basis of the issue previously at this location (homes caught in the area of flooding) of the state housing certificate (gzhs). I disagreed and appealed to the MOE, the Ministry of Finance, that this circumstance does not hit the ground for refusal of receiving SHC. Your help is very necessary that we broke through the wall of non-HUD”.

Residents of the village of Old Artica in the Altai territory asked the President to help save the school attended by 47 people. “My grandson moved in 4th grade, — said Natalia Puskinova. — Children will be sent to the neighboring village for 7 km and After school they would wait for the bus for three hours, cold, hungry. What will happen to our children?”

The situation with the school has clarified, the acting head of the Altai territory Viktor Tomenko. “It is a branch, it is small, he said. — There are the issues faculty. However, plans to close its not likely a failure at the level of municipal bodies… the school has a future, and the village has a future”.

The work of the volunteers

Another feature of “Straight line” in 2018, was the work of the volunteers who took treatment decided the issues still before the broadcast. They communicated with the officials and brought to them those or other problems of residents.

The other part of the questions that volunteers have sounded live, too, received a response. For example, student Alevtina Kiseleva asked the President a question about the program for the fight against cancer. She told about Mary Potseluyko of the Bryansk region, which was initially diagnosed with multiple sclerosis and then found a cancerous brain tumor.

Later in the Department of health region commented on this appeal. They said that problems with the treatment of Potseluyko no.

“Indeed, in October 2016 for medical assistance potseluyko Maria, born in 1990 with suspected multiple sclerosis. In December 2016 the girl was diagnosed with a cancerous brain tumor, after which she was operated in the Center of neurosurgery named after academician N. N. Burdenko. In 2017, the girl underwent a course of chemotherapy, it is now observed in the regional Oncology center, problems with her treatment there,” — said the source TASS.