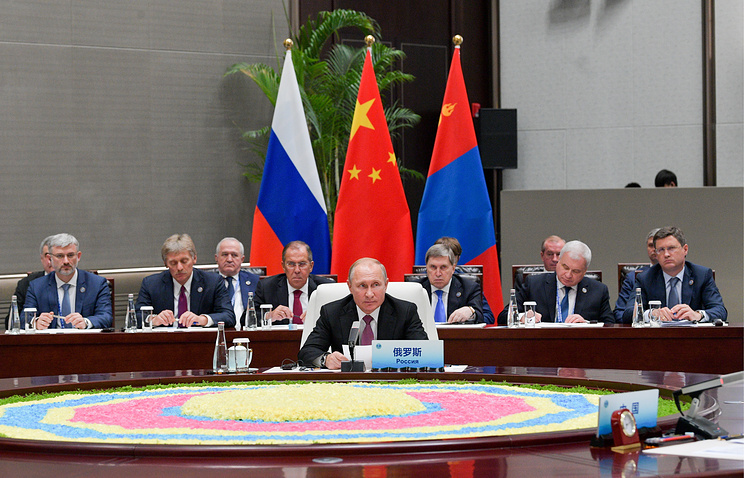 BEIJING/QINGDAO, 10 June. /TASS/. Russian President Vladimir Putin concluded his visit to China. The Russian head of state was pleased with its results. The trip consisted of two parts: an official visit, during which Beijing was discussed mainly bilateral issues and also attend the summit of the Shanghai cooperation organization (SCO) in Qingdao, on the sidelines of which the President held separate meetings with colleagues in SCO and took part in the General consultations.

Summing up the three days in China, Putin thanked the hosts of the summit for a very friendly atmosphere.

“I would like to Express my gratitude to the Chinese people, the Chinese leadership, President XI Jinping, for the extremely warm welcome, especially during my official visit to China,” he told reporters. “It was really on a high professional level and that, as a friend, everything was organized – warm and productive,” – said Putin.

The first state visit after the fourth inauguration

The Russian leader noted the great importance that Moscow attaches to developing relations with Beijing, not only for the two countries but for the whole world. “The fact that we uphold a high level of cooperation and talking about the need for its development, in my opinion, are of considerable importance for contemporary international relations, Russian-Chinese relations,” he told reporters.

Putin reminded about the signed during the visit documents. “We have confirmed a very high level of our relations with China, agreed – a Declaration from President XI Jinping was signed on further cooperation on the political track, about the fight against various threats,” he said. The Russian leader noted that “this confirmation is important because the current work very much, we must not forget about the main directions of our cooperation”. “One of them is our interaction on the international arena, in international organizations – UN, “twenty”, BRICS, SCO,” he said.

The President singled out the cooperation between Russia and China in the economic sphere, and signed a feasibility study of a greater Eurasian partnership. “Before signing the agreement still has to pass a certain time, this needs more work but this is the first very serious step to organization of major economic enterprises on a regional scale,” – he said. According to him, such a Union “is compatible with the EEC, which we are developing, and with China’s initiative of “silk road” in its economic dimension.”

According to Putin, “all this, of course, lies in a sufficiently vigorous development of trade turnover [with Russia and China] – $87 billion last year.” “I am confident that if it goes on – and it is, in any case, in the first quarter of this year, we have a significant growth in trade continues – this year we may well reach a volume of $100 billion,” – said the Russian leader.

Among important areas of cooperation he mentioned the energy sector, including nuclear energy, cooperation on the Chinese lunar programme, which will be used advanced the development of Russian aviation, joint implementation of infrastructure projects, such as cargo-passenger the road is “Eurasia”, the development of transport corridors “Primorye-1 and Primorye-2”, the joint development potential of the Northern sea route, TRANS-Siberian and Baikal-Amur railroads.

Dialogue on all these issues, Putin and XI Jinping can continue East economic forum on September 11-13 in Vladivostok, where the Russian leader invited his Chinese counterpart.

The optimal structure of the SCO

The Russian President did not elaborate on the work in the framework of the SCO, citing the fact that it resulted in a solid package of documents. Chief among them is the Qingdao Declaration – a 14-page document that contains five sections devoted to key issues on the global agenda, including the situation around Afghanistan, Syria, North Korea, the situation in the global economy and the fight against protectionism, cooperation in the ICT sector, humanitarian change.

“And if we remember that the economic growth of this region is much higher than in the world, then, of course, the prospects are very good, interesting for all countries,” he said. “Given the fact that we have today reaffirmed their commitment to the principles of free trade, combating protectionism, it is extremely important for the entire world trade for the global economy”, – said the President.

However, he did not support the interest of a reporter who tried to question him about the differences within the other groups – “big seven”. “It is a common practice, it is necessary to treat it quietly and without irony,” – said the head of state. “What does not happen, he added. – If we look at how we place the discussion in the EEC – we, too, disputes arise, and also not everything all at once sign”.

Among the questions to which you should pay attention, Putin has allocated only US intention to limit the supply of cars from Europe. “This is a serious issue, it might hurt the economic interests of many countries, primarily European ones,” he said. According to him, this decision could have a negative effect on the world economy, and the issue is “more significant” than “emotional surges”, which marked the last G7 summit.

From talking to dialogue

In General, Putin called for a shift from exaggeration of differences and cooperation. His remarks deserve a statement by the G7 leaders, who demanded from Moscow to stop “destabilizing activities”.

“As for the words about the destabilizing actions, here as well as in relation to some other event when, in particular, all showed solidarity with London about well-known events in Salisbury, but again nothing specific was said. All they say “with high probability”, solidarity in this connection there is on some shaky ground. I think we need to stop all this creative talk and move on to specific issues related to real cooperation,” – said the President.

He repeatedly stressed that Moscow is open for dialogue with all partners, in particular with the United States.

“As soon as we can,” said Putin on the possible timing of a meeting with the President of the United States Donald trump. “As soon as the American side is ready, so once this meeting will take place on the basis, of course, of my working schedule,” he said.

According to the Russian leader, trump himself “repeatedly talked about the fact that he considers such a meeting appropriate.” “I confirm this is the case in reality”, – Putin said, Recalling that during the last telephone conversation with the owner of the White house in March of this year that, in particular, expressed concern about a new arms race.

“I agree with him. In order for this all to discuss, it is necessary that our Ministry of foreign Affairs worked, the experts worked very closely with each other, and, of course, necessary personal meeting”, – concluded the Russian President, stressing that if the summit takes place, it should be filled with “concrete content”.