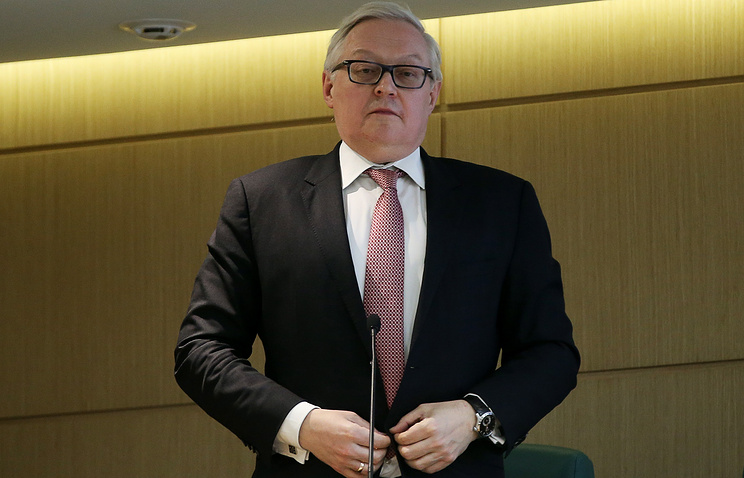 MOSCOW, June 14. /TASS/. Moscow considers it premature to begin the process of global nuclear disarmament, to approach this question it is necessary to take a sober and realistic. This was stated on Thursday by Deputy foreign Minister Sergei Ryabkov at the conference “50 years since the opening for signature of the Treaty on the nonproliferation of nuclear weapons: progress, challenges and prospects”.

He noted that it was “too serious, very complex and vitally important process to allow here to bring emotions”.

“The cessation of production of nuclear weapons, the destruction of all existing stockpiles, and the elimination of nuclear weapons and their delivery vehicles from national arsenals by definition cannot be done in isolation from efforts to conclude a Treaty on General and complete disarmament under strict and effective international control,” – said Ryabkov.

According to him, the movement towards nuclear disarmament “should be balanced and phased, with a firm reliance on the strengthening of international security and stability, the fundamental principle unchanged level rise of equal and indivisible security for all.”

The reduction of nuclear potential

He noted that Russia for 30 years has reduced its nuclear capacity by 85%.

“As for Russia, we strictly fulfil all its obligations in the sphere of nuclear disarmament, – said Ryabkov. – In line with article 6 of the NPT Russia over the past 30 years has made an unprecedented and significant contribution to the promotion of a nuclear weapons free world, reducing the size of its nuclear potential by 85 %”.And

“We also have four times reduced the number of non-strategic nuclear weapons and transferred such weapons in the category of non-deployed, focusing it on the bases of the Central storage in the national territory, – said a senior diplomat. – For further nuclear disarmament process it is necessary to focus the efforts of the international community primarily on the solution of actual problems in the field of international security and stability.”

“Among them [US] from the ABM Treaty, and then unrestricted unilateral deployment of a global missile defense system of the United States, the refusal to ratify the Treaty on comprehensive ban of nuclear tests, the development of high-precision strategic offensive arms in non-nuclear equipment, – noted the Deputy foreign Minister of the Russian Federation. The prospect of the withdrawal of strike weapons in space; continuing and sometimes increasing quantitative and qualitative imbalances in conventional weapons”.

According to him, the preservation of all these unresolved problems and a tendency to further complication of some of them “undermines trust between the States and negates all disarmament efforts”.

Ryabkov also stated the need to review the status of the U.S. in the Treaty on universal prohibition of nuclear tests (CTBT) and to take adequate measures.

According to him, the situation around the Joint comprehensive plan of action on Iran’s nuclear program “could have a negative projection on the appeared prospects for settling the situation on the Korean Peninsula.”

“We believe that to move towards the goal of denuclearization of the Korean Peninsula necessary steps, the proposals we have done bilaterally with their Chinese counterparts in other formats, they remain with the power, – said Ryabkov. – Now it is important to refrain from provocative actions, from making the ultimate and impossible demands. It would be a mistake to once again miss appeared also thanks to the constructive attitude of the DPRK and the Republic of Korea the opportunity to establish a regular substantive dialogue on the nuclear issue on the Korean Peninsula”.

Moscow proceeds from the fact that the denuclearization of the Korean Peninsula “can be reliably achieved only when organizations comprehensive solutions for all security issues in northeast Asia, and among these problems see and capacity building for US missile defense”, said the Deputy foreign Minister of the Russian Federation.

Ryabkov said that Russia maintains contacts with the United States and North Korea summit in Singapore. “Of course, there are contacts. Today Moscow is one of the top leaders of the DPRK. We receive information from various sources, the lack of it does not feel” – he said, noting that it will take some time to learn more about the summit in Singapore.

“I think, now many in the world focused on this. We will share assessments, will undoubtedly focus on the future, very active, proactive in our participation in the decision of all problems connected with the denuclearization of the Korean Peninsula, with the creation of a collective system of security and stability in northeast Asia, noted Ryabkov. Is our region, we are live. Therefore, without us, the movement in this direction is simply impossible”.

Consultation with Iran and the “eurotrashy”

Russia will spend the next few days consultations with Iran and the European countries – parties to the nuclear deal (UK, Germany, France) on the implementation of the agreement will focus on ensuring the economic interests of States.

“We will continue consultations in the coming days as with the Europeans and Iranians, – he said. – This question (about the work of the companies of the countries – participants of the deal with Iran – approx. TASS) will be among the key”.

Ryabkov noted that the protection of the interests of economic operators in Iran has now become the number one task. “Obviously the desire of the US administration to acquire yourself a business, to build to fit their economic needs, the behavior of the operators involved in various projects in Iran, he continued. But now will and political commitment of parties to a Joint comprehensive plan of action are tested. We are encouraged that the solidarity shown in this circle, very impressive.”

As noted by Deputy foreign Minister of the Russian Federation, “eurotroika” and Iran develop mechanisms that will, to the maximum extent to ensure the economic interests of the parties. “We have such a question share, but also achieve our own embedding in all the models and schemes of work in the new environment, which can be made in the EU”, – he added.