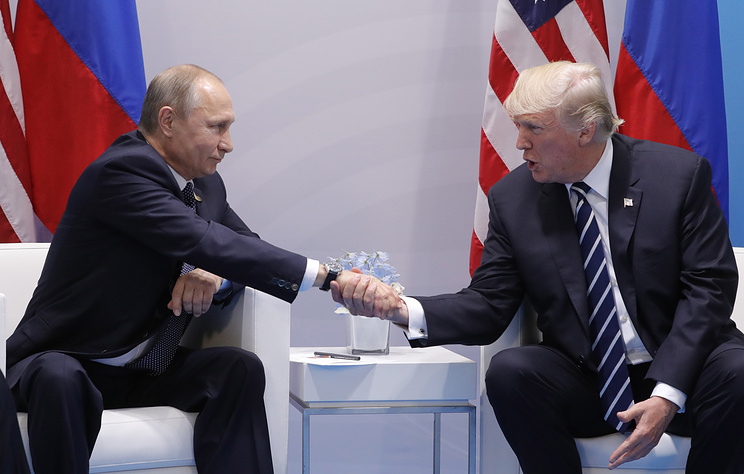 MOSCOW/WASHINGTON/HELSINKI, July 16. /TASS/. The presidents of Russia and USA Vladimir Putin and Donald trump will hold on Monday in Helsinki the first full-scale meeting outside the multilateral summits. According to statements by both sides, no one expects miracles at the end of negotiations, but in Russia, and the United States recognize the need to begin restoring relations between the two countries.

Trump arrived in Helsinki on Sunday. Putin will arrive Monday afternoon. It is planned that Putin and trump will arrive in the presidential Palace in Central Helsinki at 13:00 local time (coincides with Moscow), exit to the photographers, and at 13:15 begin negotiations.

“How much time the presidents take to communicate, we don’t know. No no limits from our side,” – said the Russian presidential aide Yuri Ushakov, adding that the meeting starts with a conversation tet-a-tet in the presence of interpreters. Followed by the Russian-American talks in the format of a working Breakfast with the participation of members of delegations, on the outcome of the summit, reporters will tell their own leaders at a press conference.

The presidents plan to adopt a final document at the meeting. “Decided not to agree on the text of the joint statement and provide an opportunity for the presidents to decide whether a joint document or they will be limited to summarizing the results at a press conference,” – said Ushakov.

“No matter what we say, but still, the fact the first full-scale meeting of the presidents is very important, it is also important for building further appropriate “chemistry” in relations between the presidents,” he said. “So the Americans and we pay great attention to bilateral contact, to which the presidents can be in a relaxed mode to cover any topics they want to discuss,” – said Putin aide.

The Kremlin is set to “debris” in the relationship

According to Ushakov, Moscow hopes that the summit will set the tone for the work on the restoration of bilateral relations. “The purpose of the upcoming meeting, as we see it, is to begin, finally, to rectify a negative situation in Russian-American relations, take concrete steps for their rehabilitation, to restore more or less acceptable level of confidence, try to outline the steps that would return to mutually beneficial cooperation on issues of mutual interest”, – said the assistant to the President, adding that “the areas where our countries’ interests are close or coincide, very much.”

“It is very important, if the Americans are ready, start to assort blockages [in bilateral relations],” said Ushakov. According to him, if the meeting in Helsinki will promote this and there will be some signals of such a plan, “then it will be the most important result of this summit”. Ushakov said that the Russian delegation “ready to see just about all key issues of bilateral and international agenda”.

In particular, Russia considers it necessary to develop economic cooperation with the United States, which would be the “safety net” for bilateral relations in General. “We have some concrete proposals in this regard and our President will tell the Tramp in the course of the conversation,” – said Ushakov.

Put Putin and the question of the project of supplies of Russian of times in Europe, “Nord stream – 2”. “This will be discussed, and we present arguments, and, in our view, the question is about economic competition; room for energy supplies to Europe will be enough for all, so we the American position seems counterproductive and contrary to the basic rules of international trade and economic relations in General”, – said Putin aide.

Among the “debris” in the Kremlin include accusations by the U.S. against Russia of meddling in presidential elections of 2016. “We are naturally concerned about the “pumped up” in the wrong key atmosphere, and we think you cannot allow the opponents of improvement of U.S. relations with Russia to speculate on this harmful and, most importantly, an artificially maintained”, concluded Ushakov.

The problems of the world: a view from the Kremlin

One of the main international topics of the talks, according to Ushakov, will discuss the situation in Syria. According to him, on the agenda are “political normalization, the launch of the constitutional process” in this country. Also, according to the Russian side, “the US and Russia could work together to help resolve the humanitarian crisis and reconstruction of the Syrian economy, to help the return of Syrian refugees”.

On the agenda also was discussion of issues relating to the DPRK, the Iranian nuclear program. In addition, “particular attention will be paid to the internal Ukrainian crisis.”

As expected, affected by the leaders and topics of strategic stability, the problems of the Treaty on the elimination of intermediate-range and shorter-range, including in the context of placing the United States on the basis of the ABM in Romania launchers.

The groundwork for new meetings

According to Ushakov, Putin and trump can agree on a schedule for further contacts. “We, for our part, are ready to continue contacts, in particular, there are good opportunities, there are international courts,” – said Ushakov, mentioning including the upcoming summit of the group of twenty in Argentina and East Asia summit.

In any case, according to him, it will be after the November mid-term elections in the U.S. Congress – “this is unlikely to be contacts.”

“I think that presidents will be able to agree on the continuation of their contacts and meetings. And there, you never know, might come over a talk about specific visits to Moscow or Washington, let’s see,” he said.

Modest expectations of US

The US President Donald trump said that they do not have high hopes for the summit in Helsinki, although, in principle, does not exclude achieving it “certain extremely exceptional” results. “I’m not going [to the capital of Finland] with high expectations, but we can achieve some very striking things,” trump said on Friday.

He stressed that relations between Moscow and Washington can normalize and under condition of preservation of the Crimea as part of Russia. “Yes, I think so,” the President said.

“If we can develop a relationship that is good for Russia, good for us [USA], good for all, then that would be great!” – said the President of the United States.

In this regard, he lamented the anti-Russian actions of the representatives of many political circles in the United States.

“We have the political problem we have in the United States continues this nonsense. Pure stupidity. However, it is very complicate any action in the Russian direction. What would you do, the answer is: “Oh, Russia… He loves Russia,” said trump.

“This is really the first opportunity to sit down at the negotiating table and start a very important dialogue, very similar to that which took place between President [Ronald] Reagan and Mikhail Gorbachev or Margaret Thatcher and Mikhail Gorbachev”, – says the diplomat.

“We should, through dialogue to understand what our expectations are about to address the key issues in our bilateral relations,” the Ambassador said.

In his opinion, the fact that the summit “is in itself an achievement.”

“Just imagine what could lead a reduction of tension in the case of USA and Russia Europe and Russia! So I would not began to underestimate the importance of the first summit and discuss issues that are of great importance”, – added the diplomat.

Trump expressed hope for the achievement of the Helsinki agreements in the field of nuclear non-proliferation. As he reminded, Russia and the United States modernize their strategic nuclear arsenals, investing huge amounts of money. President Obama actually criticized such programs in both countries.

“It’s a very very bad policy, [but] we have no choice,” he said. “I think it would be a huge achievement if we could achieve something on nuclear nonproliferation,” – said trump.

In this regard, he said that he believes the proliferation of nuclear weapons the main international issue and in favour of reducing arsenals. “For me this is the biggest problem in the world of nuclear weapons. So we can do something, in order to significantly reduce their number of nuclear warheads], mean, ideally – all to get rid of them; perhaps this is a dream,” said trump.

Helsinki: the safety of water, land and air

The summit will take place against the background of the most severe security measures that traditionally accompany the meeting of a similar level. The special zone was at the time of the event, the presidential Palace.

Starting Sunday the city introduced changes to the public transport. Monday from 11:20 local time (coincides with Moscow) will be stopped the movement of trams and buses near the Palace, in the nearby areas will be imposed extensive areas where Parking ban, motorists warn you relevant ads that appeared on the streets a few days ago.

Limited on Monday and the movement of water transport. In the southern port, which faces the presidential Palace, there will be private yachts will not be walking normally prisalivaya water trams and tour boats. Already Sunday partly closed airspace over Helsinki and close to Helsinki-Vantaa.

In the ring the security taken and the Hilton Kalastajatorppa on the Gulf of Finland, a 15-minute drive from the centre of the capital, where trump. As it was convinced the correspondent of TASS, the streets around the hotel are blocked, and sometimes with the use of army trucks. The only remaining way to the hotel with two sides, a framework of metal detectors and scanners, to x-ray personal belongings. Manholes on the streets.

In this case, as it seemed to the correspondent of TASS, the people of Helsinki the prospect of city life so much will change for a few days, not too worried about. At least, such conclusion can be made on the basis of several passers-by or colleagues living in Finland. The majority of interviewees TASS pointed out that all these restrictions are temporary, but for a city this summit is a great opportunity to declare itself as a platform, able to organize international meetings at the highest level.