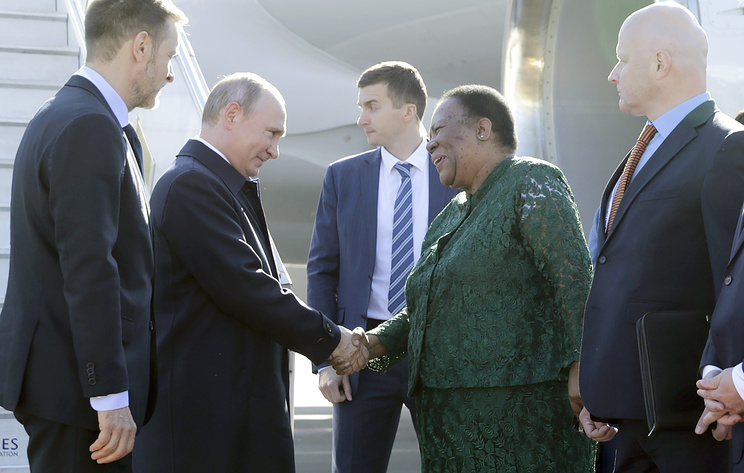 JOHANNESBURG, July 26. /TASS/. Russian President Vladimir Putin arrived in South Africa. Russian “air force one” landed in the nearby Johannesburg main airport of the Republic, named in honor of the former President of the African national Congress Oliver Tambo.

From the airport the President went to the Mercedes, but not on the new domestic limousine Aurus. As previously explained the press-Secretary of Russian leader Dmitry Peskov, series a “Tuple” is not yet produced in sufficient quantity to be transported for use in Russia and around the world. During the last foreign visit to Finland on July 16, Putin moved on Aurus, before, during a visit to Austria, on Mercedes.

The head of state on Thursday and Friday in Johannesburg will take part in the events of the tenth summit of BRICS, which will be held at the international Convention centre “Sandton”. As expected, on Thursday there will be meetings of the BRICS leaders in narrow and expanded formats, as well as the signing of joint documents.

On the same day, the planned negotiations of Putin with the President of South Africa Cyril Ramaphosa, as well as bilateral meetings of the Russian President with the leaders of Argentina, Angola, Turkey, Zambia, China, and India.

The BRICS summit will end on July 27 with two sessions, including in the format of “outreach”, that is, with the participation of the leaders of the invited countries outside the Union.