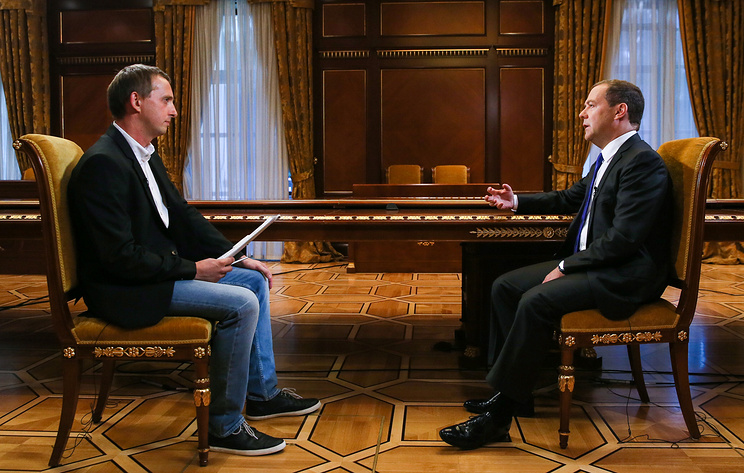 MOSCOW, 7 Aug. /TASS/. Prime Minister Dmitry Medvedev believes that the war in South Ossetia in 2008 could have been prevented, if not immoral and criminal behaviour of the then head of Georgia Mikhail Saakashvili and his henchmen. He declared it in interview to the newspaper “Kommersant”.

“If not irresponsible, immoral, criminal behavior of Saakashvili and his henchmen, no war would have happened”, – said the head of the Cabinet. According to him, the armed conflict was not inevitable, although at the time, and “there was a high degree of tension.”

Medvedev recalled that this tension arose in the 1990-ies. “I remember how in 1990 from Sochi arrived for the first time on the territory of Abkhazia – then, respectively, in Georgia, – said Medvedev. And during a conversation with ordinary people in some restaurants, somewhere else, I felt that they have a very complex relationship to those processes, which in the Republic had by then gained momentum, and by the representatives of the relatives of ethnic groups. That is, the tension was already felt at the household level.”

“So the root of the problem, of course, is that it was in 1990-e years, in those decisions that were adopted in the 1990-ies the government in Tbilisi, which were not accepted neither in Abkhazia nor in South Ossetia, – said the Prime Minister. – As a result, a conflict was introduced to the peacekeepers”. According to him, until 2008, managed to balance all of these negative remarks, and violence. “And in 2008 the government of Georgia led by the President gave the green light to aggression, and what happened is what happened, – concluded the head of government. – It was not inevitable. This, of course, is the subjective choice of Saakashvili and his entourage”.

Hope Saakashvili to the USA

The Prime Minister added that before the aggression against South Ossetia, Saakashvili believed that the United States would support him “under any scenario”.

“By the time [the beginning of the war], I think Saakashvili has formed a rigid belief that the Americans would support him under any scenario,” – said the Prime Minister. “I think by the time he [Saakashvili] has already conducted a full consultation with their patrons – in this case we are talking primarily about the United States of America,” – said Medvedev. The Prime Minister called the names of contacts at that time with Georgian President senior US officials, including Secretary of state Condoleezza rice.

Medvedev spoke about his contacts with Saakashvili. “Yes, it initially looked good, and during the first meeting, when I took office as President, he said he would like to restore the relationship that hopes to be friends in General, said a lot of nice words, the Prime Minister said. I’m all listened and say, “you Want to develop a relationship – let’s develop it. We need a normal, friendly relationship with our neighbor – Georgia, we are ready”.

According to Medvedev, he also said that Moscow is ready to help Tbilisi and “slowly and carefully” to contribute to the resolution of the internal conflict in Georgia. The Prime Minister mentioned that the country could remain in the form of Federation and Confederation “or something” – in accordance with the variety of peoples inhabiting Georgia.

The Russian Prime Minister pointed out that while Saakashvili has expressed readiness for such work, “and then somehow lost.” “I distinctly remember that somewhere in the beginning of July 2008, he resigned from ties,” Medvedev said. According to the head of the Cabinet, even then it was “worked out a line” the President of Georgia.

“On the one hand, hoped that the new head of the Russian Federation will occupy some other position in the relationship with his government and him personally, – says Medvedev. – In other words, simply will not intervene in the processes that are there [in Georgia] to go, no one would respond to actions that may be taken against our peacekeepers, and, most importantly, Russian citizens who lived in Abkhazia and in South Ossetia”.

Medvedev said that Russia in August 2008 I set myself a goal to stop the Georgian aggression against South Ossetia, not defeat Georgia, or to punish her then President Saakashvili.

Answering the question of why Russian troops during the events of August 2008 did not go to Tbilisi, located a few dozen kilometers from the Georgian capital, Medvedev said that the goal was to “knock out Georgian troops from Tskhinval to restore order and prevent further escalation of violence, that is war.”

“The goal was not to defeat Georgia, or to punish Saakashvili. I think I did the right thing when he decided to exercise restraint and not to force further action,” – said Medvedev, noting that this gave the opportunity not only to calm the situation in Georgia, South Ossetia and Abkhazia, “but to go out on fairly calm relations with the European Union and other countries.”

“If You remember, during that period, despite the rather harsh reaction, ultimately we fairly quickly were able to negotiate, and the result of the work of the Commission of Heidi Tagliavini (international Commission on investigation of circumstances of the war in South Ossetia – approx. TASS), was the statement that a military strike was caused by the Georgian side and they started the aggression”, – recalled the Premier. He noted that there were “certain judgments” about the fact that Russia used disproportionate force and so on, but they were estimated. “Most importantly, it was concluded that the aggression launched by Georgia. And this is from the history not be deleted”, – said the head of the Cabinet.

However, he again noted that he did not consider it correct to maintain a high degree of confrontation. “That’s why I like Supreme Commander, it was decided to deploy troops and bring them back to our country”, – concluded Medvedev.

Medvedev said that Russia is ready to develop a full-fledged dialogue with the new Georgian leadership.

“I think it (the 2008 conflict and the subsequent recognition by Moscow of independence of Abkhazia and South Ossetia – approx. TASS) is not a problem that forever shaped the nature of relations between Russia and Georgia, – said the head of the Russian Cabinet. – Diplomatic relations can be restored, we are not destroyed. If the Georgian colleagues are ready to restore them, we naturally will not object”.

Medvedev stressed that Georgia is now a different government. “If we talk about the career of [former President Mikheil] Saakashvili, it is, in all probability, in Georgia completed, which I think is very good for Georgia. And with the new leadership – regardless even of how their names, what their party affiliation – we are ready to build relations,” assured the Russian Prime Minister.