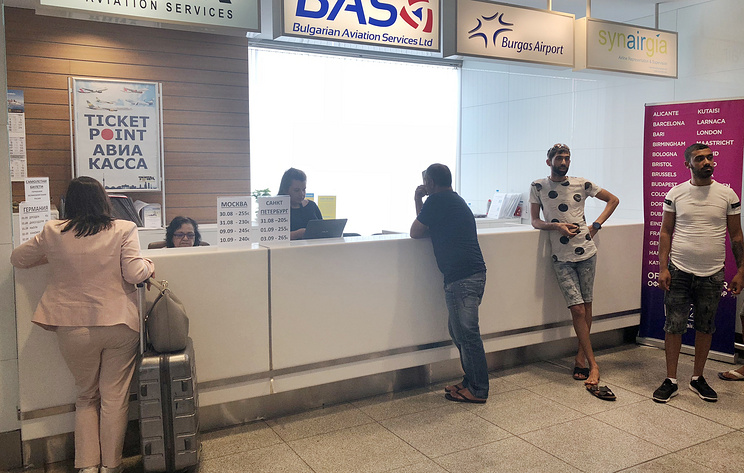 BURGAS /Bulgaria/, August 29. /Offset. TASS Igor Lenkin/. Flights to Saint Petersburg and Moscow at the airport of Burgas, rose significantly during the crisis with a tourist company “Turov”. As the correspondent of TASS, at the airport of Burgas for the period from 30 August to 1 September you can buy them not less than €230-€250, despite the fact that in the summer the tickets for seats in Charter flights were sold for €40-€50 and sometimes cheaper.

“Tickets to Moscow on 30 August, we sell for €255, the last day of August for €230. In Saint Petersburg the 1st and 3rd of September you can fly for €255 and €265, respectively,” – said the correspondent of TASS in the office of the airport. On other dates, up to September 9, tickets are not available, cashiers argue that there is no space available.

A ticket for a regular flight “Aeroflot” from Burgas to Moscow costs €190.

According to representatives of the Consulate General of Russia in Bulgaria, the next few days will be critical for thousands of unorganized Russian tourists, the tickets on which the departure from Bulgaria home company “Turov” is annulled. And diplomats have already received appeals of citizens who say that have no financial opportunity again to buy tickets, in particular, significantly more expensive than before.

“Employees of the honorary Consulate of the Russian Federation in Burgas, the Consulate General and the Ministry of tourism of Bulgaria will be on the spot to control the situation,” – said the correspondent of TASS, the General Consul of Russia in Varna Vladimir Klimanov.

The tourism authorities of Bulgaria officially informed, that on results of negotiations with Russian diplomats, representatives of the company “Turov” and Bulgarian tour operator Travel Noy “were considered different variants of agreement between the parties, and the possessive “Turov” said he would look for opportunities to provide transportation of Russian citizens.” “Following the meeting, all participants signed a Protocol”, – noted in the press release of the Ministry of tourism of Bulgaria.

The company “Turov” is in the register of tour operators of Russia, however, does not generate its own tourism product, and sells tickets. 23 Aug “Turov” announced that after August 24, tourists will not be able to use the tickets for the flights to Bulgaria airlines Bulgaria Air because of the company’s debt in the amount of about €220 thousand before a consolidator of the flight, the Bulgarian tour operator Noy Travel. As a result, according to the Association of tour operators of Russia (ATOR), affected about 2.7 thousand the Russians who have purchased tickets for Charter flights Bulgaria Air in Bulgaria and from the country, of which about 1.5 million people at that time were already on vacation.

Yet managed to agree only on the return of children’s tourist groups. 110 children came back from holiday on the 27th of August, and another 24 children will be taken on August 31, said in tourism. Just at the moment in Bulgaria is 1 thousand Russian tourists who have purchased tickets at the “Turov”.