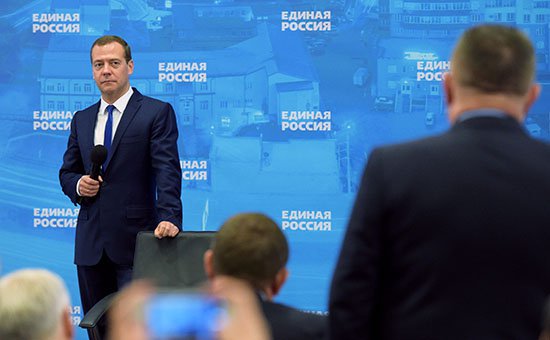 On Wednesday, representatives of the faction “United Russia” will meet with the Prime Minister and party leader Dmitry Medvedev to discuss the proposals that “it is important to maintain when adopting the budget for 2016”, said the Secretary of the party’s General Council Sergei Neverov. The meeting will be held and will be devoted only to the budget, confirmed by the press Secretary of the Chairman of the government Natalia Timakova.

Deputies at the meeting may not agree with a number of requirements of the “liberal block of the government”, said the Chairman of the Committee on labor and social policy Olga batalina.

To find funding for pensions

According to the speaker, if budget revenue allows, will be considered the possibility of doindeksatsii in the second half. Batalina said today that “we need to seek funding to spend during the 2016 doindeksatsii the pensions to the amount of actual inflation.” “We understand that to do so is February 1, as suggested by Federal law, does not work, but we are ready to return to this topic in the first six months,” said she.

“All the decisions have been made, but there are circles on the water, a different kind of PR circumstances. For example, what Prime Minister Dmitry Medvedev will meet with United Russia, said a senior government official.

“Medvedev may not give a big indexation of pensions, and the second is indexing, and it will be a step forward”, — says about the tactics of dialogue with “United Russia” the interlocutor . According to him, by the end of 2016 “money”.

The proposal to condicionat pensions in the second half is an attempt to ease the stress of inadequate indexing in the early years, the head of Fund “Petersburg politics” Mikhail Vinogradov. “This compromise very handy to the Duma elections of 2016,” — said the expert.

The faction also do not support the proposal of the government to pay pensions to working pensioners, whose income in a year exceed RUB 1 million. the proposal of the Ministry of Finance until June was discussed in the government. In the summer the Finance Ministry proposed another project: 2016 not pay pensions to working pensioners with an annual income of 500 thousand rubles.

These proposals are reminiscent of the dispossession of the 1930-ies, commented today batalina. According to her, it is necessary to support the proposal of the expert community does not index the pensions of working pensioners, but to preserve it all.

Faction at a meeting with Dmitry Medvedev will propose to introduce a differentiated scale of payment for capital repairs, in particular, to introduce a reduction factor for people over 60, and people over 80 years old to be exempt from this payment, was told on Monday batalina.

United Russia also intend to discuss the proposal of the Ministry of industry and trade to introduce a special card to purchase food, and poorly protected groups of the population. Speech should go not about food cards, and discount to pensioners discount on the cards with the budget-value goods in shops-retailers who join this program, said batalina. For its realization it is necessary to establish funds in the budget; calculations by the Ministry of industry and trade, it takes about 240 billion rubles, she added.

Also in the faction considered important to find in the budget funds for state support of regional media, this year for the first time for these purposes has been allocated 300 million rubles, said Monday the Chairman of the budget Committee Andrey Makarov. Need to come up with a mechanism to collect the money spent from the regional budget on public relations of regional leaders, and direct them to the financing regional media, he added.

Also need to address issues with the funding of educational camps of Rosmolodezh, such as “Tauris”, “Territory”, said Makarov. Not every year it is necessary to find the funds for them, and lay them in the budget, said the Deputy. In addition, it is necessary to find funds for the creation of a youth organization, said Makarov. According to him, with this idea earlier the President asked the leaders of all factions.

Which of the proposals will be supported, can be understood following the meeting, said Timakova.

Where will the money

In the budget for 2016 is proposed to form two anti-crisis Fund, told a high-ranking source in the government. In one Fund will be accumulated 360 billion rubles, which will come from the funded part of pensions.

Volume of another Fund is targeted at approximately 150 billion rubles. a Source of the second Fund will be used not the main managers of budgetary funds on January 1, 2016 costs for 2015 and 10% reduction of subsidies to state corporations and state companies. “For example, the Railways give a subsidy, and they have the same amount account balances. We want to shipping. But there is commuter and passenger transportation subsidies for these purposes in any case will be allocated. It is about 60 billion rubles. same now the Railways have leftovers. This will be the basis to 10% to cut [the subsidies]. The same applies to other children in our care — Rosatom, the Russian Federal space Agency, Rosavtodor, etc.,” says the source .

From the second Fund will be financed by “important, from our point of view, the event that we are unable to pack in the expenditure budget with the 3% budget deficit”, said the source . The spending from this Fund is provided, for example, support for exports, support for small and medium businesses in 9 billion rubles, a small innovation cost 2 billion rubles, said a government official.