The conference will be held in the format of forums. They will determine the agenda for the next year, carried out a rotation of regional offices and audit committees. 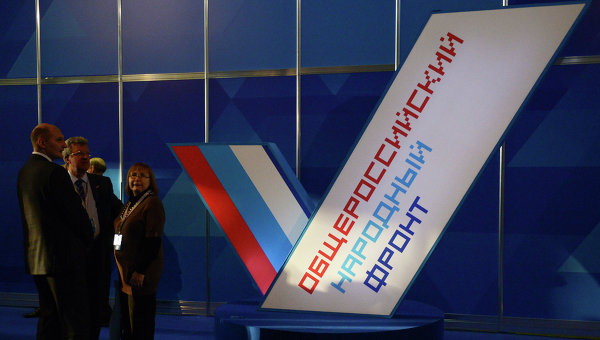 MOSCOW, 20 Oct. Russian popular front (onf) in November-December will be conducted in all regions of Russia conference, which will discuss the issues of public monitoring of execution of decrees and orders of the President of the Russian Federation Vladimir Putin, and the generated suggestions are then forwarded to the heads of regions, the press service of the onf on Tuesday.

The decision was taken at a meeting of the Central staff of onf dedicated to the work of the regional offices of the popular front at the municipal level. At the conferences, which will be held in the format of forums, will determine the agenda for the next year, and the rotation of regional offices and audit committees.

“Conferences in all regions of our country will allow you to collect sites together with activists, experts will be prepared for public offers addressed to the governors regarding the effectiveness of implementation of the may decrees and orders of the President, as well as improving the quality of life of citizens”, — quotes the press service of the movement co-Chairman of the Central headquarters of the popular front, the state Duma Deputy Olga Timofeeva.

She noted that today about 30% of problems, which raise the experts of the regional offices relate to the needs of the residents of the municipalities. Among them: the closing of schools, medical stations, kindergartens, irregularities in the resettlement of people from dilapidated housing and others.

In the beginning of last year had created a mechanism of public monitoring and overseeing the implementation of “may decrees” and other instructions of the head of state. In accordance with this mechanism, control management of the President sends in reports of the popular front government for the preparation of opinions, without which a decision regarding the President’s instructions.