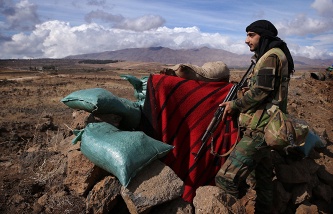 VIENNA, 30 October. The participants of the “Vienna four” (Russia, USA, Turkey, Saudi Arabia) on Thursday exchanged lists of representatives of the opposition, who could participate in future meetings on the settlement of the conflict in Syria. This was reported to journalists by the special representative of the Russian President for the Middle East and Africa, Deputy foreign Minister Mikhail Bogdanov.

“Yesterday Russia at the meeting of the Quartet gave its partners a list with the names of almost all the opposition groups with whom we associate, that we are ready to talk, to invite on some of the inter-Syrian meetings, he said. – The Saudis gave us your list, while the Americans promise”.

Sands: the timing of the operation of the Russian Federation in Syria depends on the situation in the fight against terrorism in this country

Defense Ministry: the Ministry monitors the misinformation through the media about their mistakes by IG

Media: the U.S. agrees on the participation of Assad in the transitional political process

According to Bogdanov, the Kurdish issue at the meeting of the “Vienna four” on October 29 specifically was not raised.

“No, as that this question was not discussed, he said. – Simply, we believe that the representatives of various Kurdish parties, organisations must participate in Syria talks”.

Russia supports the connection of the Free Syrian army to the political settlement process in Syria, but does not understand, who will represent, said Bogdanov.

“Overall, we want the structure as they participated, he said. – Who is going to present, we have not yet very clear. We expect that they somehow brought this more clearly, either at the same time we suggested to our partners that this “Syrian free army” have relations”.

Bogdanov added that the contacts on the settlement of the conflict in Syria the main thing that “the Syrian opposition has realized that she wants, and agreed on some General approaches agreed on the composition of delegations that will these approaches promote during the negotiations, we hope, with the Syrian government, as it involves the Geneva communique”.

In the meeting, “Vienna four” on October 29 was attended by Russia, the U.S., Turkey and Saudi Arabia. Turkey repeatedly say negative things about operating in Syria the Kurdish militia, suspecting them of terrorism.