MOSCOW, November 11. Deputies of the state Duma on Wednesday during the “Government hour” ask the Deputy Prime Minister Arkady Dvorkovich about the evacuation of Russian tourists from Egypt and how will be the support of tour operators.

“Deputies will be interested in how the question of the return of Russian tourists from Egypt”, – said earlier the speaker of the state Duma Sergey Naryshkin, Recalling that Dvorkovich heads the operational headquarters of the government for the suspension of air links with Egypt. 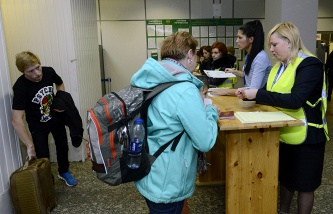 Dvorkovich: the Cabinet will support the tour operators due to the cancellation of flights to Egypt

PCT: the loss of tour operators from the ban on flights to Egypt are estimated at 1.5 billion rubles

The Russian President Vladimir Putin on 6 November agreed with the recommendations of the National anti-terrorism Committee to suspend air traffic with Egypt. Putin also instructed to provide assistance to Russian citizens in return from this country. At that time in Egypt there were almost 80 thousand Russians. About 40 thousand people, according to the government of the Russian Federation on 10 November, has already returned to Russia.

In addition, MPs will ask about what the government intends to take to make any real change in the field of import substitution.

The deputies of the faction “United Russia” intend to ask the experts, planned in 2016 to allocate Federal funds for rehabilitation of radioactively contaminated land in the Bryansk region affected by the Chernobyl accident. As follows from the issues that United Russia Dvorkovich has written in advance in writing, the Vice Premier will be asking about how the system works staffing in the Executive, taking into account the frequent corruption scandals.

Parliamentarians are also interested in whether control of the growth of prices for gasoline in the Russian Federation regions, and what are the main factors of rise in price of fuel. During the “Governmental hour” speech including goes about the rational use of farmland, quality of food, as well as the problems of accessibility of railway transport. Will be applied and many other issues, noted Naryshkin.