The meeting of presidents of two countries Vladimir Putin and Recep Tayyip Erdogan took place behind closed doors in the hotel “REGNUM” of the resort village Belek and lasted about an hour. 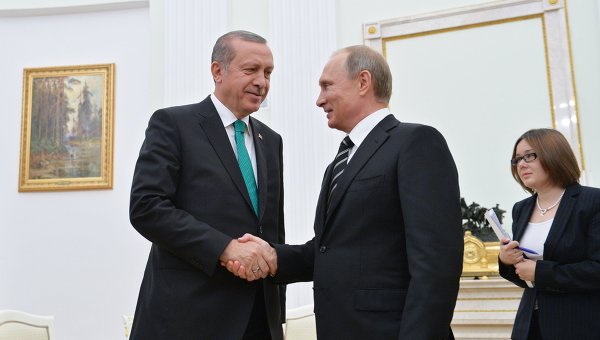 ANTALYA, 16 Nov. Alain Le Creative Cluster. Russian-Turkish cooperation Council of the highest level will be held in Russia on 15 December, the presidents of two countries Vladimir Putin and Tayyip Erdogan agreed during their bilateral meeting on the sidelines of the summit of G20 leaders in Antalya.

The Turkish Ambassador in Moscow Umit Yardim said in October that Erdogan plans to meet with Putin at the end of December in Kazan.

The meeting between the two leaders took place behind closed doors in the hotel “REGNUM” of the resort village Belek and lasted about an hour. From the Russian side was attended by Minister of foreign Affairs Sergey Lavrov, Turkish foreign Minister Feridun Sinirlioglu, the Minister of energy Ali rıza Alaboyun and the head of the Turkish intelligence organization Hakan Fidan.

Before the meeting, when journalists photographed the leaders, Erdogan asked Putin, as was his meeting with German Chancellor Angela Merkel. What Putin smiled and responded in English: Good, very Good.

Group of twenty (G20) is the Premier forum for discussing global economic and financial cooperation. The G20 brings together the largest developed and developing economies, which accounted for about 85% of world GDP. In 2013, the G20 was chaired by Russia, in 2014 and Australia in 2015 Turkey.