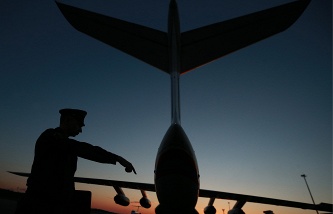 MOSCOW, November 26. The aircraft of Ukrainian airlines do not operate flights over the territory of the Russian Federation, although the official ban by the Russian authorities was not. On Thursday in an interview with radio station “Russian news service” said the Advisor to the head of Rosaviation Sergey Izvolsky.

Rosaviatsia: Kiev to ban the transit can mean no guarantee of safety

“Ukrainian airlines for some reason are not doing the flights via Russian territory, although it was not forbidden,” said he, answering the question about the response of the Russian Federation on a ban of transit flights through Ukraine.

On the eve of Prime Minister of Ukraine Arseniy Yatsenyuk at the Cabinet meeting said that Ukraine has closed its airspace to Russian aircraft, including transit flights. Earlier the ban on transit through the airspace of Ukraine acted only against military cargo and military personnel of the Russian Federation.