MOSCOW, December 4. Air and space forces of Russia for a week have killed 12 stations pumping fuel, 8 oil fields and oil and gas complexes, as well as more than 170 “Nalivayko”, owned by the extremists. On 4 November, said the official representative of the Ministry of defense of the Russian Federation Igor Konashenkov.

“Last week the Russian planes were destroyed on 12 stations to pump fuel, 8 oil fields and oil and gas complexes, as well as more than 170 Nalivayko”, – said Konashenkov.

431 sortie during the week

Aviation of the Russian Federation for a week has fulfilled 431 sortie from the air base Hamim and attacked almost 1,5 thousand objects of terrorists, said the representative of the defense Ministry.

“Over the past week, from 26 November to 4 December, the Russian aviation has completed 431 sortie from the air base Hamim and struck pinpoint strikes on 1458 objects of terrorists in Aleppo, Idlib, Latakia, Hama, HOMS, Deir-ez-Zor and raqqa,” said Konashenkov.

He explained that he was attacked command posts and control centers, training camps of fighters, munitions and weapons, as well as the strongholds of the terrorists.

“I want to emphasize that all flights of our bombers and attack aircraft were covered with su-30,” – said Konashenkov.

During the last day Russian su-34 destroyed up to 40 tanker trucks that grouping of IG used for the transportation of petroleum products, the General said. 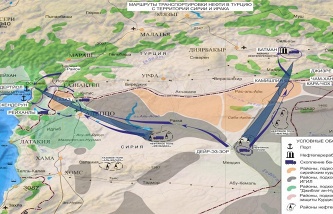 “In the last day bombers su-34 struck for two automotive columns on the roads in areas of settlements of Aleppo and raqqa which destroyed up to 40 tankers and trucks, converted for transportation of petroleum products,” – said Konashenkov.

Earlier the defense Ministry reported that due to Russian airstrikes income of militants from the illegal oil trade has been reduced by half – from $3 million to $1.5 million In this case, told in the defense Ministry, terrorists had access to about 8.5 by the thousands of trucks that daily carry more than 200 thousand barrels of oil.