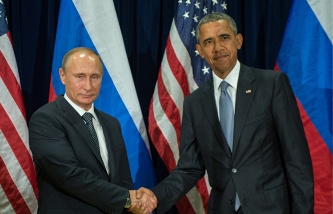 SOCHI, January 12. The President of Russia Vladimir Putin does not agree with U.S. President Barack Obama, who considers Russia a “regional power”, while the United States is exceptional. He said this in an interview with German newspaper Bild, the second of which was published on Tuesday, January 12.

Experts in the U.S. are cautiously optimistic about the chances of improving relations with Russia

“No I didn’t take these words”, – said the Russian leader, answering the question as it applies to similar statements by Obama. “Everyone, especially the President of the United States, has the right to have an opinion on anything else about their partners, about other countries; it is his opinion, just as I know his view that the American nation, the United States is exceptional,” said he. “I don’t agree neither with the one nor the other,” he said.

The President of the Russian Federation noted that Russia does not claim the role of “superpower” because “it is very expensive and for what?” According to the Russian leader, in terms of GDP, the country ranks fifth in the world. “Now, maybe a little smaller, keeping in mind… economic complexity… but we do know that we have very good prospects for development and potential. Purchasing power parity is somewhere around sixth place”.

As for the status of “regional power”, the President of the Russian Federation called on to decide what kind of area is it. Putin, having suggested to look at a map of the world, recalled the scale of the Russian state, which stretches from Europe to the USA and Canada, from near the North pole to China.

“You try reasoning about other countries in a derogatory manner is the other side to prove their exclusiveness,” – concluded Putin. “It seems to me that this is wrong,” he said.