The drop is often compared with the situation in 1998, when oil prices fell by about 2.5 times, and the industry fell by 40%, said Prime Minister Dmitry Medvedev. The current processes in the economy do not go to any comparison with what happened then, he said. 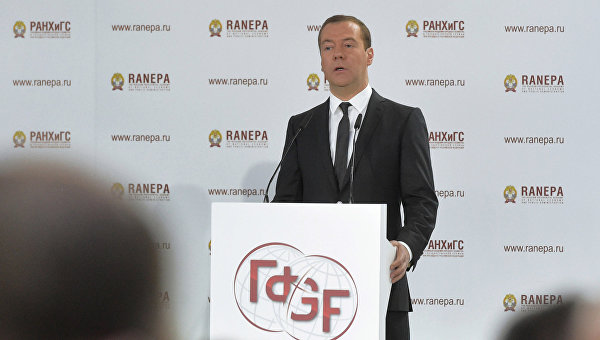 MOSCOW, 13 Dec –. The current situation in the Russian economy is significantly different from the 1998 crisis year, and today Russia is learning to live with cheaper oil in reality, said Prime Minister Dmitry Medvedev.

“Today we are learning to live in cheaper oil reality. The current drop in prices is often compared to the crisis of 98-th year. Then oil prices fell about 2.5 times for 2 years, the industry has collapsed by 40%. Now prices were falling and stronger, and faster. Against high, who was a few years ago, almost 600%, can be considered”, — Medvedev said during his speech at the Gaidar forum.

According to him, the economic situation is influenced by the sanctions. “The situation certainly did not improve and sanctions. But we’re not seeing what was happening in the economy in ‘ 98. Crisis gradually cured us of the habit of relying mainly on revenues from hydrocarbons,” he added.

“Because the maximum freedom from natural resource rents — is also a question of geopolitical independence. We must therefore work to ensure that offers to the world market was more interesting and competitive than raw materials”, — said Medvedev.