MOSCOW, January 26. The USA aims to dominate the world, and have made efforts to weaken Russia, even to the attempts to bring about its complete disintegration. This opinion was expressed by the Secretary of the Russian security Council Nikolai Patrushev in an interview to the newspaper “Moscow Komsomolets”.

“The U.S. government outlined a goal to dominate the world. In this regard, they do not need a strong Russia. On the contrary, they need to weaken our country. Is not excluded the achievement of this objective and by the collapse of the Russian Federation. This will open up the United States access to rich resources, which, in their opinion, Russia has unfairly”, he said.

Answering clarifying question, does the US want the collapse of Russia in the part, Patrushev said: “Washington believes that if you wish able to play a catalytic role in this process.”

NATO is increasing its power potential

According to Secretary SB the Russian Federation, including in this connection the Russian side “are concerned by the increasing power potential of NATO and the empowerment of global functions in violation of international law”. 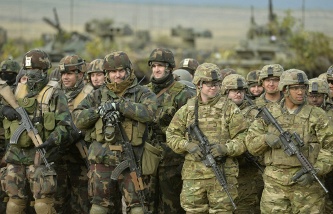 “The intensification of military activities of the countries of the block, further expansion of the Alliance, the approach of its military infrastructure to Russia’s borders pose a threat to our security,” he admitted.

Thus Patrushev underlined that “the NATO leaders clearly follows in the Wake of American policy.” “To neutralize the “overly independent” members of the Alliance (France, Germany and Italy) Washington skillfully uses anti-Russian orientation of the Eastern flank of the North Atlantic block”, – he added.

The Russian Federation is not interested in confrontation with the West, stated Secretary of the security Council.

“The basis of Russia’s foreign policy stems from a desire not only to defend their own interests, but also take into account the interests of other partners,” said Secretary of the security Council .

According to him, “the initiator of the current conflict is the United States.” “Europe subject to their will. So the decision on the termination of confrontation does not depend on Russia. We are for the resumption of equal cooperation is always ready”, – said Patrushev.